Pushing his Luck: Report of the expedition and death of Henry Whitcombe 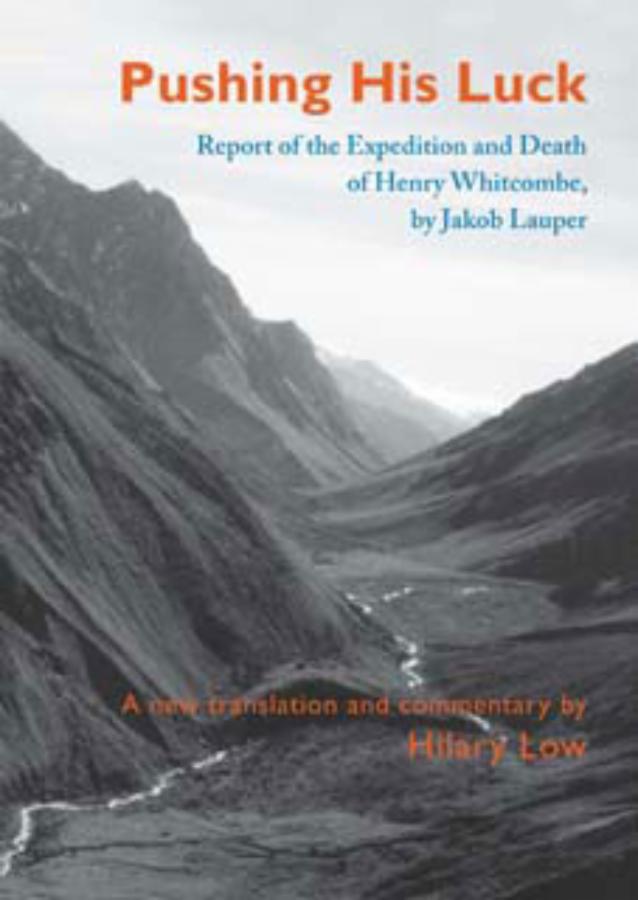 Jakob Lauper. A new translation and commentary by Hilary Low

In 1863 Henry Whitcombe, a young civil engineer and Canterbury’s Provincial Road Surveyor, led an expedition to find a route across the Southern Alps in advance of the West Coast gold rushes. Jakob Lauper, a hardy Swiss goldminer, was hired to accompany him.

The journey turned to tragedy. Dogged by appalling weather and half-starved, the two men traversed the Main Divide by a pass that now bears Whitcombe’s name, and struggled down to the western beach. There the exhausted Whitcombe drowned while attempting to cross the flooded Taramakau River.

Against extraordinary odds, Lauper survived and made his way back to Christchurch. His report on the expedition was translated into English and published in mid-1863. The story has inspired a number of writers to retell it, notably John Pascoe in 1960. Relying on the English translation, Pascoe was baffled by some apparent inconsistencies in Lauper’s account.

This prompted Hilary Low to go back to Lauper’s report and begin a painstaking re-translation. It soon became apparent that errors and omissions abounded in the first translation. Lauper himself had made one significant geographical mistake, and this had been compounded by other errors made by his translator.

Pushing His Luck provides for the first time an accurate translation of Lauper’s vivid account, and explains the significance of the new information brought to light. Nearly 150 years after the event, the truth about this journey – one of the enduring stories of early New Zealand exploration – is finally told.

Hilary Low has a degree in English literature and a postgraduate qualification in librarianship from Victoria University of Wellington. She returned some years later to study German, and travelled to Germany on a Goethe Institut language scholarship. She has worked as a professional librarian in special and academic libraries, and for some years now as a freelance adviser and project manager in the government sector and on a diverse range of community projects. Pushing His Luck is her first book. Arising out of this project, she has transcribed the little-known manuscript ‘The Westland Goldfields, from the Diary of William Smart’ for publication.