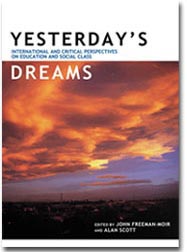 The connection between social class and education has been a source of interest and debate for fifty years. During the post-war boom, the underlying moral and social principle that guided education in the Western democracies was the principle of 'equality of opportunity'. It was through a sincere application of this principle that the meritocratic society, distinguished by an easy social mobility among its citizens, was to be achieved.

Yesterday's Dreams assesses education's post-war promise by analysing the current evidence concerning the relationship between social class and schooling and articulating some of the key issues that surround this relationship.

Leading educationalists and social theorists such as Michael Apple, Peter McLaren, Michael Peters, Stanley Aronowitz, Elizabeth Kelly and Hugh Lauder demonstrate the international reach of the debate. Along with other distinguished contributors, they continue the tradition of concerned academics shedding light on what are continuing contradictions of capitalist societies which, on the one hand, offer the hope of social mobility and on the other are beset by deep-seated inequalities.

With chapters from the United Kingdom, the United States, Australia, Canada, New Zealand and South Africa, Yesterday's Dreamsdemonstrates how difficult has been the pursuit of equality within education and how difficult it has been to realise the utopian vision of a socially just world where the application of fairness and opportunity would be an unquestioned fact of everyday life.

John Freeman-Moir is Dean of Undergraduate Studies (and member of the Eudcation Department) at the University of Canterbury, New Zealand. His interests are in the sociology and politics of education and higher education.

Alan Scott is Head of the Centre for Performing Arts at the Christchurch College of Education, New Zealand. His interests are in the sociology and politics of education, teacher education and drama education, and theatre.