Worlds Apart: A history of the Pacific Islands (Second edition) 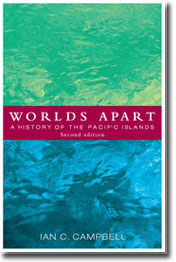 The Pacific Islands remain for most people a region of obscurity or puzzlement.

The attention of news media is attracted by atypical events such as political violence that contradict the peaceful tourist image of sun, sea and smiling faces. Journalists, travellers, business people and the general public have few paths to access specialised knowledge about the complex and changing ‘neighbourhood’ to New Zealand’s north and Australia’s northeast.

Ian Campbell’s History of the Pacific Islands, first published in 1989, served this purpose for many years, and its successor, Worlds Apart, has proven to be equally serviceable, bringing into focus the past and present of this diverse and endlessly misunderstood region.

This concise and readable narrative has now been revised to bring the story of the island world – from its
first settlement by raft and canoe voyagers, through the period of western contact and acculturation – up to 2010.

As with its earlier versions, this book has been written not for fellow academics, but for the many people who want to know ‘what happened’.

He has worked at a number of universities in the Pacific, and in archives around the world, building up the expertise that lies behind this book.

The current revision was undertaken while he was a visiting research professor at Kagoshima University, Japan.