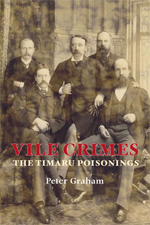 So begins Vile Crimes, an account of one of the most extraordinary New Zealand murders. Peter Graham's examination of Hall's dapper murderous intent and the ensuing court case, undoubtedly the most sensational to have ever occurred in the whole colony, is riveting and fast-paced. Shortly afterwards, Hall was charged with the murder of his father-in-law, Captain Henry Cain, whose body was exhumed for evidence.

Lawyer Peter Graham has pored through hundreds of pages of evidence and delved into legal and other contemporary accounts of the two cases to present a fascinating portrait of this scandal and its effects on a newly emerging colonial society, and of the man at its centre.

' … this is a terrible tale well told which will appeal to lawyers and laypersons alike.' Amy Mansfield, NZ Lawyer Magazine

' ... the result is a rollicking good read about a case that gripped the country in 1886.' Denis Welch, New Zealand Listener

Peter Graham has spent 30 years in Hong Kong as Crown Counsel and a barrister in private practice. Having returned to his native Canterbury Plains, he now grows apples, supervises a few pigs, reads a lot of history and mulls over the past. This is his first book and, with other subjects in mind, he hopes it will not be his last.