The Reinvention of Everyday Life: Culture in the twenty-first century 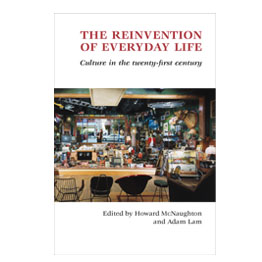 Cultural change happens all the time, everywhere. It can be retarded, as was repeatedly shown in the twentieth century when state, corporate and even religious interests as various as apartheid, the Cultural Revolution or the Vatican attempted to arrest it.

The acceleration of change towards the end of the century is often attributed to the new technologies, particularly in communications, but equally imnporant are forces of globalisation, biotechnology and lifestyle patterns in which the extraordinary becomes the everyday, the sensational the taken for granted.

This volume traces twenty fields of cultural change that became prominent in the ‘haunted and disjointed times’ Nicholas Mirzoeff has identified in the late twentieth century, from email to installation art, from the new museology to leisure style, from media fashion to cyberpunk. In the process, everyday life is constantly reinvented, as the plethora of things that ‘will never be the same again’ constantly displaces and disfigures what we took to be tradition, values and tastes we thought would be forever with us.

Chapters are grouped in terms of ‘cultural production and display’, interpreting museums, buildings and environments, ‘performance and role-playing’, using physical performance and social drama as ideological display, ‘identity construction in postmodernity’, looking at how the media constructs identity, and ‘the human/machine interface’, the role of the body in the age of advanced mechanism.