The Ngai Tahu Deeds: A window on New Zealand history 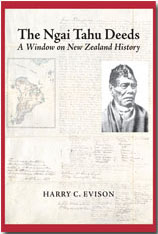 Harry Evison re-examines New Zealand colonial history in the light of a number of original documents, particularly the ten Ngai Tahu deeds by which the Crown acquired Maori title to the southern half of New Zealand from 1844 to 1864.

A unique feature of the book is its handsome colour reproductions of these deeds and their plans, published here for the first time.

During intensive research in the Crown deeds archive, the author compiled transcripts and commentaries on the Ngai Tahu deeds and associated documents, which are included here to encourage readers to examine the images and make their own conclusions.

Sixteen chapters of text provide a fresh account of the period and the key people involved. They are written in the uncluttered style that won the author the 1994 New Zealand Book Award for Non-fiction for Te Wai Pounamu: The Greenstone Island. Chapters on Maori aboriginal title and the impact of the Treaty of Waitangi and the Wakefield scheme, and the Maori policies of Governor Grey, challenge some popular assumptions about New Zealand history.

Besides the deeds documents, the author draws on original manuscripts such as private and official letters and journals, Native Land Court minutes, and royal commission testimonies. Thus the Maori voice is heard alongside the official voice. The Ngai Tahu Deeds is intended as a manifesto for the scientific method, demonstrating the use of original primary sources to find out what probably happened in history

Harry Evison was born at Beckenham, Christchurch, in 1924. He studied at West Christchurch District High School and Victoria University College, Wellington. His 1952 MA history thesis on Canterbury Maori was the first to attribute Maori destitution to land loss. He has assisted Ngai Tahu at the Waitangi Tribunal, and his previous books include Te Wai Pounamu: The Greenstone Island and The Long Dispute: Maori Land Rights and European Colonisation in Southern New Zealand.