The Canterbury Roll – A Digital Edition 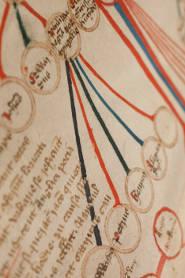 The Canterbury Roll is a 15th-century English genealogical text. It was created in the late 1420s/early 1430s and subsequently modified on a number of occasions before final revisions were made to it, most probably during the reign of Richard III (1483—1485). The genealogy is accompanied by an extensive commentary in Latin. The five-metre long manuscript roll, the work of at least four scribes, was purchased by the University of Canterbury in 1918 from the Maude family of Christchurch.

This open access Digital Edition presents a new transcription and English translation of the Roll, both of which are mapped to a high quality digital facsimile. The edition is accompanied by academic apparatus, a detailed introduction, and full documentation. It is embedded within a website that provides further contextual information on the Roll and its history.

The edition is a product of the Canterbury Roll Project, a multi-stage initiative led by the UC History Department in partnership with the UC Arts Digital Lab, the UC internship programme, the Collaborative Research Centre 933 of Heidelberg University (Germany), and Nottingham Trent University (UK).

Chris Jones (General Editor) is a Senior Lecturer in History at the University of Canterbury. He is especially interested in the thought of medieval chroniclers, and in the way in which ideas were transmitted and received in the Middle Ages. His publications include Eclipse of Empire? Perceptions of the Western Empire and its rulers in Late-Medieval France (Brepols, 2007) and the edited collection John of Paris: Beyond Royal and Papal Power (Brepols, 2015). Chris co-edited Treasures of the University of Canterbury Library (2011) for Canterbury University Press and, with Stephen Winter, the collection Magna Carta and New Zealand: History, Law and Politics in Aotearoa (Palgrave Macmillan, 2017). He has served as President of the Australian & New Zealand Association for Medieval & Early Modern Studies since 2015.

Christopher Thomson (Digital Humanities Consultant) has research interests that lie at the intersection of literary studies and digital humanities. His focus is particularly on the way digital media technologies shape and are shaped by cultural practices. Currently he is working on a database and website project entitled Kōmako: a bibliography of writing by Māori in English (with Dr Bridget Underhill), and on an analysis of digital media responses to the Canterbury earthquakes. Chris has other research interests in adaptations of literature in digital media, posthumanism in literature, and on the application of text mining as a research method in the humanities.

Maree Shirota (Lead Transcriber) is a doctoral candidate in History at Heidelberg University, Germany and the Collaborative Research Centre 933. Previously she studied at the University of Canterbury and the University of Adelaide, Australia. Her research focuses on 15th-century genealogical manuscripts from Western Europe. She published on the Canterbury Roll’s presentation of deposition in the journal Parergon in 2015.

Elisabeth Rolston (Lead Translator) is an MA candidate in History at the University of Canterbury with a background in classical languages. Her research focuses on the representation of emperors in later medieval Latin chronicles. Her first article will appear in the journal Parergon in 2018.