Sleepwalking in Antarctica: and other poems 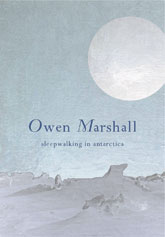 Behind us all, falls
a landscape of experience, softened by nostalgia . . .

This fine new collection of poetry, Owen Marshall’s second, is rich in the themes and preoccupations that have made his short stories and novels so admired.

Here are wise, elegiac poems on love and loss, longing and regret, and ageing; beautifully observed, affectionate poems about the New Zealand countryside, where ‘clear cold barking comes from miles away’; sly and sharply witty poems about human frailty – ‘Death’s an old joke, the Russian said/but comes to each of us as a surprise’; poems that look back to a distant past whose inhabitants were ‘much the same as you and me’ – all expressed in language that is superbly balanced and finely judged.

Sleepwalking in Antarctica is the work of a master writer at the height of his powers.

Born in Te Kuiti in 1941, Owen Marshall is known most widely for his short stories, but is also the author of three novels. One of these, Harlequin Rex, won the Deutz Medal for Fiction in the 2000 Montana New Zealand Book Awards. In 2004 he published a poetry collection entitled Occasional: Fifty Poems. He has also edited a number of collections. Marshall has held fellowships at Canterbury and Otago universities and in Menton, France. In 2000 he received the ONZM for Services to Fiction and in 2002 was awarded an honorary doctorate of letters by the University of Canterbury, where he is also an adjunct professor.