Rising from the Rubble: A health system's extraordinary response to the Canterbury earthquakes 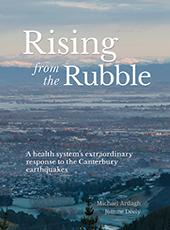 How do health care workers manage disaster on an unprecedented scale?

The 2011 Canterbury earthquakes were more challenging to the region’s health system than anyone could have expected. The injured needed immediate treatment, buildings and equipment were badly damaged, aftershocks continued to rock the area, and communities were disrupted by flooding, liquefaction and fear. Despite this, many ordinary people – hospital and laboratory staff, general practitioners (GPs), pharmacists and  others – accomplished extraordinary things in the aftermath of such devastation.

Rising from the Rubble gives a compelling account of those who rallied to maintain and rebuild essential health services, maintaining continuity of care for the most vulnerable – from older people to those with kidney failure – as well as dealing with the significant ongoing impact on mental health. From the immediate emergency response after the earthquakes to sustaining health services over the following years in highly demanding circumstances, the stories of medical staff joining forces, collaborating and volunteering are infused with sadness, pride and even joy.

Based on interviews with those who lived and worked through the Canterbury earthquakes, and the authors’ own experiences, Rising from the Rubble is an inspiring testament to commitment and recovery.

'This book tells the stories, often in deeply personal ways, about how the health care system and the community staggered and responded.'
From the Foreword by Sir Peter Gluckman

Joanne Deely (PhD, BSc, GDipTeach, GDID, MRSNZ) is an independent scientist and professional science writer. She researches and writes for the Canterbury District Health Board and for New Zealand universities.