Revenge of the Rich: The neoliberal revolution in Britain and New Zealand 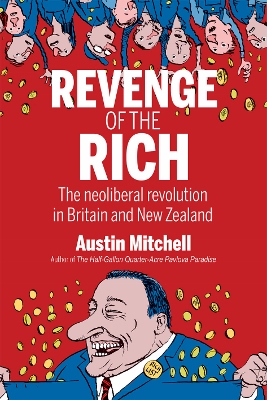 Yorkshireman Austin Mitchell lived in New Zealand for eight years while lecturing in political science. In 1972 he wrote his best-selling commentary on the New Zealand way of life, The Half-Gallon Quarter-Acre Pavlova Paradise. Now he returns to the fray with Revenge of the Rich, an outspoken opinion piece on the impact of neoliberalism on society in Britain and New Zealand, based on his popular lectures as a visiting fellow at the University of Canterbury in 2016.

In his down-to-earth and lively style, Mitchell, who experienced politics first-hand as a long-serving Labour MP for Grimsby, denounces the economic policy of the last three decades as ‘a long march down Dead-End Street’ – a neoliberal experiment that has benefitted the rich and eroded the ‘good society’ with its welfare state and governments’ commitment to the betterment of the people.

He charts the development of a neoliberal creed, market-driven and with governments devoted instead to efficiency, cost-cutting and austerity at the people’s expense, and draws parallels between Thatcherism in the United Kingdom, Rogernomics in New Zealand, and all that came after them. Mitchell observes how neoliberalism has failed to deliver on its promises, including that of the ‘trickle-down’ effect, resulting in much greater inequality in both countries. Ultimately, he finds useful lessons in its failure and possible pointers to a fairer society for all.

‘Austin Mitchell’s passion for reducing inequality shines through. … Mitchell’s writing provokes us to reflect on what our common future could be.’
From the Foreword by Rt Hon. Helen Clark

Austin Mitchell taught at the universities of Canterbury and Otago and was one of the original team that founded the Political Science Department at Canterbury. In the UK he has been successively a Fellow of Nuffield College, a journalist for the BBC and ITV, and the Labour MP for Great Grimsby from 1977 to 2015.