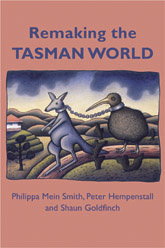 Remaking the Tasman World explores New Zealand’s most important and extensive relationship – with Australia – on a variety of levels over the past century. The authors present a combined narrative about a ‘Tasman world’, a working region defined by a history of traffic in ideas, policies, objects and people.

This wide-ranging, fresh analysis focuses on myriad ‘communities of interest’ that have spanned the Tasman Sea for over a hundred years, yet have largely been ignored by national histories. The concept of Australasia – the British world south of Asia – may have become old hat, but a Tasman world still operated, and in an increasing rush from the 1960s.

From early maps of Australasia to accounts of shared state experiments, of a trans-Tasman business world, sport and Anzac bonds, the authors unearth a common past and reorder it in a history infused with wit and insight. They also look forward, envisioning a fresh start for a trans-Tasman community facing the 21st century.

'This scholarly yet accessible book by a team of historians should have considerable appeal
to geographers.' Eric Pawson, New Zealand Geographer

Philippa Mein Smith holds a Personal Chair in History and is Director of the New Zealand Australia Research Centre at the University of Canterbury. Her previous books are A Concise History of New Zealand (2005), A History of Australia, New Zealand and the Pacific (as co-author with Donald Denoon) (2000), Mothers and King Baby (1997), and Maternity in Dispute (1986).

Peter Hempenstall is Emeritus Professor of History at the University of Canterbury. He is a Pacific historian and biographer and a frequent trans-Tasman traveller, believing that only regular transfusions of both Kiwi and Aussie culture can keep antipodeans alive and healthy. Among his books are Pacific Islanders under German Rule (1978); The Meddlesome Priest: A life of Ernest Burgmann (1993); and (with Paula Tanaka Mochida) The Lost Man: Wilhelm Solf in German history (2005).

Shaun Goldfinch is Associate Professor at Nottingham University Business School and formerly a senior lecturer in the Department of Politics at the University of Otago. He is the author of Remaking New Zealand and Australian Economic Policy (2000), co-author of Dangerous Enthusiasms: E-government, computer failure and information system development (2006), and co-editor of Handbook of International Public Sector Reform (2008).