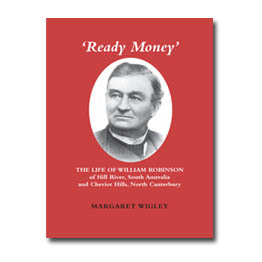 William Robinson, known as ‘Ready Money’ because he usually paid in cash, developed a great estate at Cheviot in North Canterbury in the nineteenth century.

Born in Lancashire, the son of a farm bailiff, he first emigrated to South Australia, where he began to amass assets as an overlander, droving stock across state lines. He established an impressive estate at Hill River but moved to New Zealand in 1856, drawn by the more temperate climate.

Robinson was a man of energy and vision. At Cheviot Hills he created another vast estate renowned for its excellent pasture and stock, its fine tree plantings and well-designed gardens. He and his wife, Eliza, had five daughters and a son, who died in South Australia at the age of two.

In 1866 they built a great house, designed by Robert Speechly, who was supervising the building of Christchurch Cathedral. Twenty years later it was more than doubled in size and became known as the Mansion House.

Robinson had an important role in setting up the first telegraph in North Canterbury, selecting the main north road, building the Hurunui bridge and an ambitious slipway as a ‘port’ on an inhospitable coast. He also spent 20 years in the Legislative Council.

After his death, his estate became the county of Cheviot, with today’s town of Cheviot at its centre.

William’s great-granddaughter Margaret Wigley, MA(Hons), drew on the Cheviot Hills Station diaries and many other original sources to bring us this lively account of her notable forebear, whose dream was to establish a property after the style of the great estates of the country of his birth.