Place Names of Banks Peninsula and the Port Hills 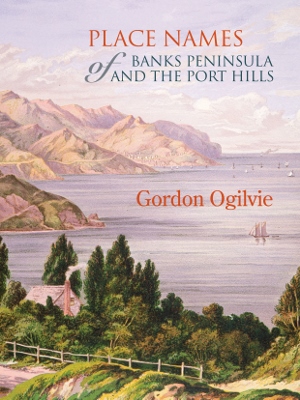 Place names have great linguistic and cultural significance, vivifying the landscape and giving it deeper character and interest. Banks Peninsula, Lyttelton Harbour and the Port Hills of Christchurch offer a wonderfully diverse and kaleidoscopic array of names that speak of the area’s Māori and colonial history and the people who have lived and worked there.

Back in 1927 prolific author Johannes Andersen published his classic and important Place Names of Banks Peninsula, but much has changed since then: names have dropped out of use or been superseded, spellings have altered, knowledge of origins has improved and large numbers of new names have been added. Award-winning historian Gordon Ogilvie, who has a deep knowledge of this part of New Zealand, has written a comprehensive, fascinating and much-needed successor to Andersen’s book. The coverage of names extends to the Heathcote and Halswell rivers and includes suburbs like Halswell and Tai Tapu.

Engagingly written, brimming with information and enriched with black and white photographs and stunning colour plates, this substantial volume is an important addition to Ogilvie’s popular and acclaimed histories of Banks Peninsula and the Port Hills. The intriguing background he provides for the place names of this region will delight all those who live there, those who visit and anyone with an interest in New Zealand’s past.

Gordon Ogilvie was born in Christchurch in 1934 and brought up in Horotane Valley. His love of Port Hills’ history began with a growing appreciation of the Heathcote-Ferrymead district, so crucial to the early development of Canterbury, and holidays on Banks Peninsula gave him a taste for Peninsula history. Despite a busy teaching career, finishing as Head of English at St Andrew’s College, he has achieved great acclaim as an author of award-winning regional histories The Port Hills of Christchurch and Banks Peninsula: Cradle of Canterbury, and two of his biographies, The Riddle of Richard Pearse and Denis Glover: His Life, were Book of the Year finalists. In 1998 he received an Arts Excellence Award from the Canterbury Community Trust. Two years later he was awarded an honorary doctorate by the University of Canterbury and in 2007 received an ONZM for service to historical research and writing.