Paikea: The life of I.L.G. Sutherland 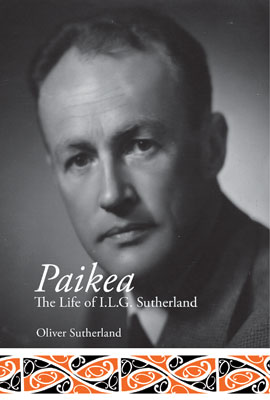 Ivan Sutherland was the first Pākehā scholar to recognise that Māori New Zealanders are not brown-skinned Pākehā but heirs to their own cultural beliefs, customs and practices.

Born in 1897, Sutherland was a brilliant scholar who studied at Victoria University College and Glasgow University before returning to Victoria to work under his mentor, Professor Thomas Hunter. He shared Hunter’s liberal convictions and engaged in various progressive community initiatives, including establishing New Zealand’s first children’s psychological clinic, attacking the rise of the eugenics movement, helping launch the Wellington Film Society, and campaigning for public radio. During the 1930s he was part of a young group of lively intellectuals including John Beaglehole, Horace Belshaw, R.M. Campbell and W.B. Sutch.

His commitment to social psychology drew him into the world of Ngāti Porou, where Apirana Ngata became his second mentor and a life-long friend. Dismayed by what he considered to be undeserved criticism of Ngata in the report of a 1934 commission of inquiry into the Native Affairs Department, Sutherland published The Maori Situation, denouncing Pākehā ‘racialism’ and affirming his commitment to a bicultural New Zealand. Later he master-minded and edited The Maori People Today, published as New Zealand celebrated the 1940 centennial.

In 1937 Sutherland became professor of philosophy at Canterbury University College, appointed at the same time as Karl Popper, with whom he had a difficult relationship. Nevertheless the two worked together spearheading a committee dedicated to bringing Jewish war refugees from Hitler’s Germany into New Zealand.

As a mark of respect for Ivan Sutherland, Ngāti Porou gave him the name of one of their legendary tipuna: Paikea.

Oliver Sutherland is a retired scientist who studied first at the University of Canterbury, and then at Cambridge University and the University of California (Berkeley). He joined the DSIR in Nelson in 1969, remaining with the department and then Manaaki Whenua Landcare Research until 2003. On returning from study overseas he joined the Nelson Māori Committee, established the Nelson Race Relations Action Group and, in 1973, the Auckland Committee on Racism and Discrimination. In the mid-1980s Oliver led an attack on the mono-culturalism of the science sector and helped conceive and frame the Native Flora and Fauna Claim to the Waitangi Tribunal (Wai 262).