On a Saturday Night: Community halls of small-town New Zealand 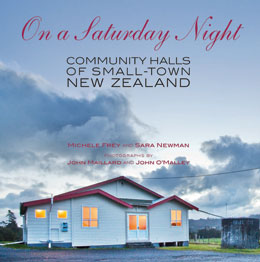 On a Saturday Night is a warm and colourful celebration of the strength and spirit of small towns all around New Zealand.

From Whakapara in the north to Mossburn in the South, community halls have been the focal point of small towns for as long as the towns have been on the map. These halls have hosted school classrooms, general elections, stag parties, birthday parties, film screenings, Rabbiters' Balls, flag euchre evenings, farewells and welcome-home parties for servicemen from both world wars, memorial events for those who did not return, farm auctions, clearing sales, weddings, Christmas parties, Civil Defence teams, mayoral celebrations, church services ...

Some halls have been demolished and rebuilt over the decades, other have been lovingly restored several times and are still going strong. Some halls have been transported on the backs of trucks to new locations as towns have grown and changed. Fires and floods have taken their toll in more than a few cases.

Michele Frey and Sara Newman visited these halls with photographers John Maillard (North Island) and John O'Malley (South Island) to talk to the locals and try to capture the essence of what each hall has meant - and means - to its community. In these stories and pictures they have recorded an aspect of New Zealand's unique culture that seems to be passing into history.

An ode to our small communities, where tiny halls have historically provided a hub for parties, plays, dances and the competitive arts of baking and bottling … There's a mood of good will we could do more of.' Weekend Herald

Michele Frey is a Strategic Planner (Natural Environment and Recreation) for Opus International Consultants Ltd in Napier. She has always had a strong affinity with the notion of community, and seized eagerly upon the idea of producing a book on small-town halls, with the opportunity it offered to gain insights into the dynamics of small New Zealand communities. Along the way she developed some lifelong friendships. This is Michele's third book for Canterbury University Press.

Sara Newman grew up in a small town and knew all about the importance of community halls. She has had articles published in magazines in New Zealand and abroad, including Takahe and New Zealand Memories. While a member of the South Island Writers' Group she won the Ngaio Marsh Trophy for fiction in 2009. Her work is included in several anthologies and her family history Living Between the Lines has been read on National Radio.