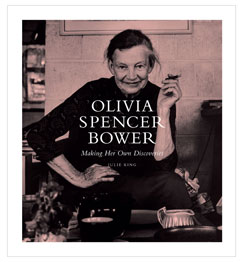 ‘I paint for myself. That’s the only way. For when you paint to please it’s not the honest thing & inhibits the chances of discovery, because there’s no point in writing or painting unless you make your own discoveries.’ Olivia Spencer Bower wrote those words near the end of an almost six-decade career as one of New Zealand’s finest and best-loved artists.

Born in England, she initially came to New Zealand reluctantly but learned to call this country home and to cherish its landscape, particularly in the South Island. She was a superb watercolourist, but worked in a wide variety of media and was always keen to experiment and remained open to new ideas. Outwardly sociable, hospitable and colourful, the friend of artists from Rita Angus to Colin McCahon, she remained a private, thoughtful person.

Her conviction that artists should have the freedom and opportunity to make their own discoveries led to the establishment of her art award, an ongoing legacy to subsequent generations in New Zealand.

In this, the first book to consider Olivia Spencer Bower’s life and work, art historian Julie King offers, through a lively and impeccably researched text and a selection of watercolours, paintings, drawings, prints and illustrations, a superb evocation of one of the most important and vital artists this country has produced.

Julie King came from England to teach art history at the University of Canterbury. She has curated nationally touring exhibitions of the work of Sydney Lough Thompson and Margaret Stoddart, and she is the author of Sydney Lough Thompson: At home and abroad (Robert McDougall Art Gallery, 1990) and Flowers into Landscape: Margaret Stoddart (Robert McDougall Art Gallery and Hazard Press, 1997). She has researched and written about many aspects of art, and contributed articles to Art New Zealand and numerous publications, including Portrait in the Looking Glass: The world of Jacqueline Fahey, 1957–1995 (Fisher Gallery, Manukau, 1996), Victoria’s Art: A university collection (Adam Art Gallery, 2005), Rita Angus: Life & vision (Te Papa Press, 2008), Art at Te Papa (Te Papa Press, 2009) and New Zealand Art: From Cook to Contemporary (Te Papa Press, 2010).