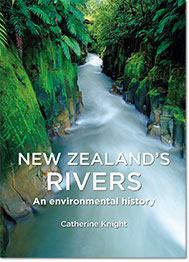 Rivers are central to our identity as New Zealanders. They shape our landscape, forming the fertile plains we live and farm on, and provide the water that is so critical to our lives and economy. Since Europeans first settled in New Zealand, rivers have been exploited for both personal and public gain. We have taken water from rivers, returning it laden with pollutants; we have harnessed them for irrigation and to generate electricity. After nearly two centuries of taking our rivers for granted, we are facing a crisis. New Zealand’s Rivers: An environmental history tells the story of how we got to this point. It examines:

New Zealand’s Rivers is a must-read for all New Zealanders interested in the future of our environment and economy. Confronting the history of our complex – and often conflicted – relationship with rivers is critical to building a shared understanding of how to better manage this precious resource into the future.

‘… informs a New Zealand response to a world concern for the natural freshwater environs: what they were, are now and how they should be for our successors.’