My Mother and the Hungarians, and other small fictions 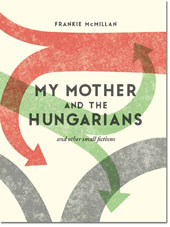 A small child permanently loses all sense of direction after she falls out of a tree. Hungarian refugees learn the local idiom: she’ll be right; right as rain. The Social Welfare snoops around a boarding house where immigrant men weep for their homelands and a young child misses her father who is only across town. Years later, an adult woman becomes obsessed with Vladimir Putin; another tries over and over to understand the relationship between her mother and the band of refugees who were under her wryly affectionate, and sometimes distracted eye in the 1950s.

'My mother kept boarders like other people kept chooks or stray dogs. She liked the refugees best with their suitcases, their canvas shoes tied up with string, their boyish faces and willingness to share a bed so that if one woke in the night crying, no shoot, no shoot, the other could turn and blanket their sorrows with their old European ways. My mother said our house was a little window into the twentieth century and that the cold war would soon be over.'

In this new collection of flash fiction from Frankie McMillan, family relationships are explored through exaggeration, humour, and surreal eddies of simile and metaphor that broaden the pieces out to look askance at politics, culture and history. Although there are genuinely laugh aloud moments, usually the humour is ‘clandestine’: looking at human vulnerability and oddity, spotlighting miscommunication, yet doing so with fondness and empathy: a delight in all the rough edges between us that proximity can heighten – and yet which intimacy tries to soothe away.

Frankie McMillan is the author of The Bag Lady’s Picnic and other stories (Shoal Bay Press) and two poetry collections, Dressing for the Cannibals (Sudden Valley Press) and There are no horses in heaven (CUP). Her work was selected for The Best New Zealand Fiction anthologies in 2008 and 2009 and for Best New Zealand Poems in 2013 and 2015. In 2009 she won first prize in the New Zealand Poetry Society International Poetry Competition. In both 2013 and 2015 she was the winner of the New Zealand Flash Fiction Award. Frankie McMillan was awarded the Creative New Zealand Todd New Writers’ Bursary in 2005 and held the Ursula Bethell residency at the University of Canterbury in 2014. She currently teaches at the Hagley Writers’ Institute.

My Mother and the Hungarians is published with the support of Creative New Zealand.