Murder on the Maungatapu: A narrative history of the Burgess Gang and their greatest crime 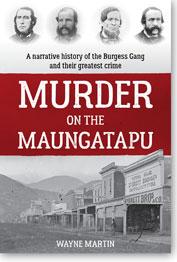 In the winter of 1866 New Zealand’s most notorious bushranger, Richard Burgess, knelt at a small desk in his Nelson prison cell, took up his quill pen and began to write. His life, he knew, was beyond salvation but words were the last weapon at his disposal to consign his mortal enemy, gang turncoat Joseph Sullivan, to the gallows. The blood-soaked confession that followed was described by Mark Twain as ‘without its peer in the literature of murder’.

Five bodies had been recovered from Maungatapu Mountain in the upper South Island, and another from the West Coast. But who had done the killing, and how many other victims were there? What had brought the ruthless Burgess Gang to this point? Drawing on a wealth of primary sources, including little-known original accounts by Sullivan, Murder on the Maungatapu tells the fascinating full story of a dark episode in this country’s history.

This is a superbly written tale of blood and gold, of betrayal and vengeance, and it draws some startling conclusions about New Zealand’s crime of the nineteenth century.

Wayne Martin is a Christchurch-based writer, history enthusiast and mechanical engineer. His articles, usually destination pieces with a strong historical backdrop, have appeared in Avenues, the Dominion Post, NZ Today, AA Destinations, Australian Traveller and Latitude magazine, among others. In 2009 Wayne won the South Island Writers’ Association Suffrage Cup for a short memoir. In 2013 he wrote the corporate history, Strength to Strength: A 75-year history of Powell Fenwick Consultants.

Listen to Wayne Martin being interviewed by James Dann of RDU.

Listen to Wayne Martin being interviewed by Lynn Freeman on Standing Room Only.