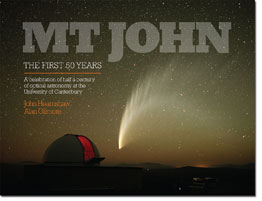 Mt John University Observatory is New Zealand’s only professional research observatory for optical astronomy. John Hearnshaw, a past director of the observatory, has delved into the observatory archives to write this engaging account of Mt John’s fascinating history. Alan Gilmore, the recently retired observatory superintendent, has added to this with his personal recollections, having worked at the observatory for more than 34 years.

Fifty years ago, in 1965, Mt John University Observatory was founded at Lake Tekapo in the Mackenzie Basin to take advantage of the favourable conditions for astronomy. Telescopes were installed, and in 1981 a lighting ordinance helped protect the site from light pollution.

Astronomical research had been thriving on Mt John for 40 years when astro-tourism started to take off, largely due to the venture company Earth & Sky. Today Mt John is both a research observatory and a mecca for stargazing astro-tourists, who come to see the pristine landscape and the amazing dark night skies. It is one of the most beautiful astronomical observatories in the world, but also a place with an often turbulent history, having been rocked by personality battles, funding shortfalls, student demonstrations and, on one occasion, a destructive fire. In spite of all that, its scientific work has been an outstanding success, and Mt John’s research work, especially in stellar astronomy, is known and respected around the world.

Mt John – The First 50 Years: A celebration of half a century of optical astronomy at the University of Canterbury is richly illustrated with almost 200 figures, many of them outstanding landscape and nightscape photographs taken by the acclaimed Tekapo photographer, Fraser Gunn.

Alan Gilmore developed an interest in astronomy from an early age, building telescopes while at school and using them for amateur observing work. He completed a degree in physics from Victoria University and worked at Wellington’s Carter Observatory before moving to Mt John at the end of 1980 to take up the position of Mt John superintendent (site manager).