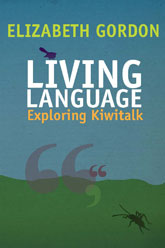 ‘Me and Dad flew home from Aushtralia on Ear New Zealand and there was nothink we wanted more than fush’n’chups with youse guys.’

Is New Zealand English going to hell in a handcart, or is it simply evolving into an increasingly distinctive Kiwi form? Should we be seeking to hold on to the old and claw back what we have ‘lost’, or should we learn to accept change and rejoice in something that is uniquely our own?

Sociolinguist Elizabeth Gordon has been commenting on this and other matters of linguistic debate in a weekly column in the Christchurch Press for the past two years. This book is a compilation of those 100 columns, each one a fascinating reflection on our changing language.

Elizabeth Gordon was born and brought up in Christchurch. She can claim a great-grandparent who came out on one of the first four ships in 1850, and two forebears who came to the West Coast goldfields in the 1860s. She has taught at the University of Canterbury since 1967, first in the English Department and later in the Department of Linguistics. Her great interest has always been New Zealand English, especially the New Zealand accent. She was a co-leader of the project on the Origins and Evolution of New Zealand English (ONZE) at the University of Canterbury. Now retired, she continues to carry out research into New Zealand English.