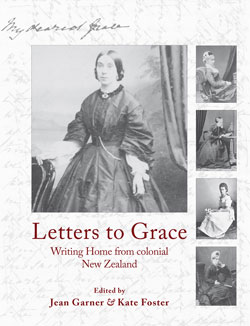 This remarkable collection of letters provides a rare female perspective on life in colonial Canterbury, when letter writing was the only way to keep a close relationship with family on the other side of the world.

The writers were four women of the Hall family. Unlike Charlotte Godley and Lady Barker, whose correspondence and impressions of the time have been widely promulgated, the Hall women were anonymous members of the middle class in England with no ties with the aristocracy.

But ironically, the letters are significant partly because all four were the wives of public men in New Zealand. Rose was wife of Sir John Hall, who was Premier of New Zealand 1879–82. Sarah, Agnes Emma and Rose were married to three Hall brothers, and the youngest correspondent was Agnes’ daughter, Agnes Mildred.

The recipient was the elder women’s sister-in-law, Grace Neall, in England. The women were typical of their time in that their lives and their letters focused on children, household duties, health, housing and servants. Outside the home, church, shopping and social events were the main topics, with Rose also occasionally commenting on her husband’s political life. The letters came to light in England in 2008, found by a great-grandson of Grace, Tim Rix. He sent them to his distant cousin Kate Foster.

Accompanying the annotated transcriptions of these letters, published for the first time, is a superb essay by noted historian Jean Garner, introducing the Hall family and placing them in an appropriate historical context. The book also includes helpful glossaries explaining medical terms, voyage details of ships mentioned in the letters and other historical terms.

'Letters to Grace has much to offer those in search of the domestic and social detail of colonial women's lives. Moreover, it should inspire the guardians of our historic collections of letters to consider similar textual analysis and publication.' Jennie Coleman, Archifacts

Jean Garner (d.2012) specialised in New Zealand social history. Her doctoral thesis, a biography of Sir John Hall, was published as By His Own Merits. With Letters to Grace, her ambition of writing about the domestic side of Hall’s life was achieved. She wrote essays on Charlotte Godley, rural Canterbury and social issues in 19th-century Canterbury. She has also contributed to The Dictionary of New Zealand Biography. In her other working life, she co-ordinated support for students with disabilities at Lincoln University.

Kate Foster is a great grand-daughter of Rose and John Hall. She and her husband live at Terrace Station, Hororata, where Rose and John lived when these letters were written. Kate is keeper of the family stories, which she enjoys sharing with anyone interested in Canterbury history.