Keep in a Cool Place: The first winter at Vanda Station, Antarctica 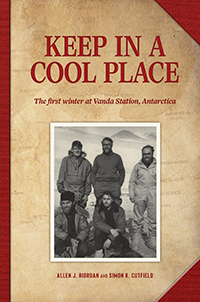 In 1969 Al Riordan, a US Exchange Scientist, joined Simon Cutfield and three other New Zealanders to spend a year at Vanda Station on the shores of Lake Vanda in the Dry Valleys of Antarctica. The men lived in a strange world – a snowless place that had not seen a glacier for millions of years, yet lay within sight of the permanent East Antarctic Ice Sheet. The surface of the lake was covered in 3–4 metres of permanent ice, but the temperature of the water near the bottom was +25°C. No one knew for certain why the water was so warm, and Simon’s mission was to take measurements to help solve this mystery and carry out a range of other hydrologic and earth science projects. Al’s aim was to help build a comprehensive weather record, understand the valley wind systems, and to learn why the area was snow-free.

Drawing on their diaries and letters, this is a unique first-person account of life at the station as the five men carry out their daily tasks in an environment that challenges and transforms them: temperatures as low as –57°C, eight months of total isolation, including four months of continual darkness, and daunting mechanical and logistical challenges, including a limited supply of power, fuel, heat and water. At least it’s no challenge to follow the instructions on their photographic chemicals – ‘Keep in a cool place’ – like much of their supplies, this equipment is encased in ice.

Supplemented with scientific appendices, the book also gives the reader a window on how scientific knowledge is built one step at a time, from the initial planning, to data gathering, to building hypotheses, and to developing theory. As the only complete record of life at Vanda Station during the first year of its occupation, and complemented by a selection of maps and colour photos, this engaging account is an important missing chapter in the history of New Zealand’s Antarctic achievements.

Allen Riordan retired from his position as associate profes­sor at North Carolina State University where he had taught meteorology and conducted research not only at his desktop computer, but also in wind tunnels, at sea in winter storms, and with forecasters at the National Weather Service. Al and his wife live in Raleigh, North Carolina.

Simon Cutfield was inspired for adventure by meeting Sir Edmund Hillary during his student days in Auckland. On his return from Vanda, Simon ventured to Australia in early 1970 to ride the mining boom. He married there and became a met­allurgist and process engineer in major mining projects across Australia. He now lives in South East Queensland.

Listen to Al Riordan and Simon Cutfield being interviewed by Kathryn Ryan on RNZ Nine to Noon.