Julius Haast in the Southern Alps 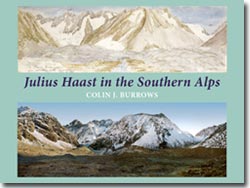 He met Ferdinand Hochstetter and joined him on geological and topographic surveys of Auckland and Nelson Provinces, an experience that broadened his hobby interest in geology.

By 1860 he was a competent geologist, able to survey the Grey and Buller districts for the Nelson Province and to advise the Canterbury Province on the Lyttelton rail-tunnel route through the Port Hills.

In Canterbury, Haast was appointed Provincial Geologist (1861–68, 1874–76), founded the Canterbury Museum and was Professor of Geology for Canterbury University College.

This book, illustrated by many of Haast’s drawings, focuses on his pioneer scientific work in the central Southern Alps. Particularly it covers his contributions to topographical and geological mapping, and his innovative studies of the glacial geology of the region. His German doctorate in science and Austrian and British knighthoods were awarded largely for this work.

As well as following Haast’s journeys and relating his story about the evidence for vast glaciation of the Westland and Canterbury regions, chapters of the book examine the glacial record in the Southern Alps back to the beginning of the Ice Age, two and a half million years ago, and up to the present day.

Colin Burrows was born in Canterbury and taught plant science at the University of Canterbury from 1960 to 1993. He was awarded a PhD in plant ecology and a DSc in Quaternary science, and his research included study of recent as well as ancient glacial phenomena. His keen interest in mountaineering took him to most of the places that Haast visited.