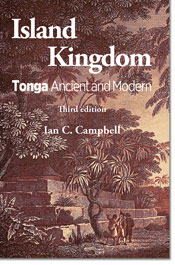 The island kingdom of Tonga, situated in the South Pacific about a third of the way between New Zealand and Hawai‘i, was probably the first part of Polynesia to be settled by humans, about 3,000 years ago. Periods of isolation alternated with periods of regular contact with neighbouring island groups while Tongan culture developed its distinctive variant of the Polynesian theme. Modern Tonga was moulded by dramatic changes in the nineteenth century during which the population converted to Christianity, and a formal state was established under a written constitution. As a result of benign British supervision, Tonga was the only Pacific archipelago not to be formally controlled by a European power. After two or three generations of tranquil consolidation, late in the twentieth century a vigorous and ambitious king forced his country into a trajectory of economic development and rapid social change, which eventually created a demand for political reform and democratisation. Tonga is less isolated, more prosperous and yet seemingly more troubled now than at any time in its history.

First published in 1992, Island Kingdom is the only comprehensive treatment of its subject and is widely acknowledged as being the authoritative history of Tonga. This third edition is updated and revised in accordance with recent research, and new chapters bring the story up to the end of 2014.