In the Absence of a Jury: Examining judge-alone rape trials 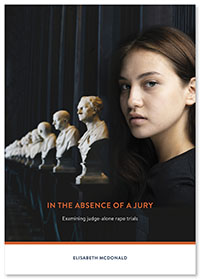 Calls for changes to the trial process in rape cases, including removing the jury as decision-maker, have been consistent over time and across jurisdictions. Victims and survivors of sexual violence, their supporters, law reformers, researchers and academics from many disciplines have advocated for the removal of the jury from rape trials for many years. Some claim it is indeed the panacea for all that is unacceptably brutal in the current trial process, with the jury being described as “the cause of most of the damage done”.

Anecdotal evidence, and some research, suggests that in judge-alone trials cross-examination is shorter, there is less reliance on the “real rape” schema, and the issues at trial are more focussed. It is also likely that judge-alone trials involve fewer delays and pre-trial appeals, and that the hearings are not as disrupted (for example, by the need for legal argument in the absence of the jury). Research also indicates a difference in verdict choices between judges and juries in the specific context of cases involving allegations of sexual violence, with the behaviour of the complainant being seen as “contributory fault”. Further, the way counsel conducts their case may vary when the judge is the decision-maker, which may impact on trial outcome.

Due to the continued widely-held view that replacing the jury with “some other entity” will have the effect of decreasing the negative impact on the complainant as a witness in the trial process (along with other desired effects such as reducing the decision-maker’s reliance on rape myths and misconceptions), it is important that empirical research is available to inform future public debate. This book records the results of such research.

“Whether judges sitting alone perform significantly better [in rape trials] is therefore a key question explored in this book. It does so by, for the first time, comparing empirical data from actual jury trials and judge-alone trials. It therefore makes an extremely important contribution to this debate, and I commend it to anyone who is interested in law reform in this area.” From the Foreword by Warren Young QSO

“By carefully comparing judge-alone with jury trials, Professor McDonald reflects that while there may be some positive variations with judge-alone trials, format alone does little to protect rape complainants from damaging and distressing attacks on credibility and other forms of cross-examination based on rape myths – and judicial and prosecutorial intervention is far more limited than might have been expected. This is a must read for all involved in the handling of sexual violence allegations in contemporary criminal justice systems, in and beyond Aotearoa New Zealand.” Julia Quilter, University of Wollongong

“On their own terms, and particularly when situated alongside her prior pioneering study of jury trials, McDonald’s findings are urgent and important. In particular, they illustrate the extent to which barriers to justice – both procedural and substantive – experienced by rape complainants across jurisdictions will not be resolved merely by removal of the jury. Instead, progress requires an ambitious whole-system response that interrogates the broader dynamics of the adversarial criminal trial, and in particular its propensity to expose rape complainants to distress and dubious myths. The book is vital reading for academics and law-makers alike, both in and beyond Aotearoa.” Vanessa Munro, University of Warwick

“McDonald’s earlier published research exposed the prevalence of rape myths in New Zealand’s jury trials and has already influenced the current Government’s legislative response to sexual violence. In this sequel research ... her findings bring the experience of complainants in rape cases ‘into the sunlight’, and may startle those not already familiar with the criminal trial process. Every book McDonald writes in this area becomes required reading for those working in our criminal justice system or who are concerned about how it approaches allegations of sexual violence. This latest is no exception.” Andrea Ewing, criminal lawyer

Elisabeth McDonald MNZM is an independent legal researcher and Adjunct Professor of Law at the University of Canterbury. She has taught and published in the areas of sexual and family violence, law and sexuality, criminal law and the law of evidence for over 30 years, as an academic and as the Policy Manager for the evidence law reference at the New Zealand Law Commission. Elisabeth is the author of a number of evidence law textbooks and online legal resources, including Rape Myths as Barriers to Fair Trial Process (2020), and is co-editor of From “Real Rape” to Real Justice (2011) and Feminist Judgments Aotearoa: Te Rino, the Two-Stranded Rope (2017).