Greek and Roman Treasures in Christchurch 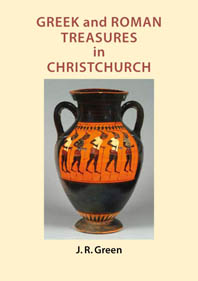 This book presents a selection of 30 objects from the James Logie Memorial Collection of Classical Antiquities at the University of Canterbury, Christchurch.

Founded in 1957 when Marion Steven of the Classics Department gifted items of Greek pottery in memory of  her husband, James Logie, University Registrar 1950–56, the collection has developed into one of the finest repositories of Classical treasures in New Zealand.

Each of the items in this selection of highlights from the Logie Collection is illustrated and expertly described, providing the reader with an opportunity to see and understand the work of  craftsmen going back more than three thousand years.

Richard Green is Emeritus Professor of Classical Archaeology at the University of Sydney and director of the excavations at the site of the ancient theatre in Paphos, Cyprus.

He has research interests in the evidence for Greek and Roman theatre performance as well as in Greek pottery more generally. He has long been a friend of the Logie Collection.