Forerunners of the All Blacks 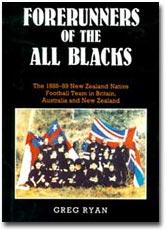 The real 'Originals' were not the All Black team who toured Britain in 1905-6, but the Native team of 1888-89. The first international rugby team ever to tour Britain, they played an astonishing 107 matches - against more difficult opposition than anything encountered by the famed 1905 and 1924 All Blacks.

They were often controversial, described as professionals and gamblers; they lost one match after drinking too much champagne, and three players walked off during a test match in protest at refereeing decisions. Yet the Natives were a very serious rugby team who provided two future national team captains and changed the style of New Zealand rugby for years to come.

This is their fascinating, hitherto untold story.

Greg Ryan has been a keen follower of rugby all his life, and this led him to research the Native team's story for his MA thesis in history at the University of Canterbury, completed in 1992. He has also studied the history of New Zealand cricket since 1840, and currently lectures in history at Lincoln University, Canterbury.