Flight of the Huia: Ecology and conservation of New Zealand's frogs, reptiles, birds and mammals 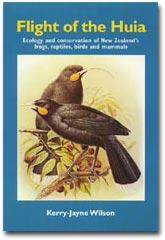 New Zealand once had a most unusual vertebrate fauna. Once home to the mighty moa, it is the only place in the world where tuatara and Jurassic-style frogs and other bizarre creatures such as kiwi and kakapo still survive. As the last major land mass to be settled by people, New Zealand has suffered one of the most severe but perhaps best documented extinction cascades during the two thousand years since first human contact.

This book tells the story of New Zealand’s birds, mammals, reptiles and frogs, from their Gondwanan origins to the arrival of the first rats, then people and their camp followers. The loss of now-extinct birds and the introduction of other species have changed ecological systems in this country for ever.

In the last fifty years New Zealand has become a world leader in the conservation of endangered species. Flight of the Huia reviews the way our attitudes to and management of conservation have changed during this time and concludes with a debate on future directions for conservation of this now much altered fauna.

'Dr Wilson has achieved the difficult task of writing comprehensive science for the informed general public without detracting from its value as a scholastic reference book.' George. W. Gibbs, Notornis

Kerry-Jayne Wilson has had a life-long fascination for natural history and for thirty years has been active in conservation. She is a senior lecturer in ecology and conservation at Lincoln University, where she has played a key role in the development of new subjects that address the particular needs of New Zealand students. Kerry-Jayne has worked on many of the island refuges in the New Zealand region and has observed in the wild most of New Zealand’s endemic birds. She has published about 50 scientific papers and numerous reports on the ecology of various birds and mammals arising from studies in New Zealand and overseas. This was her first book.