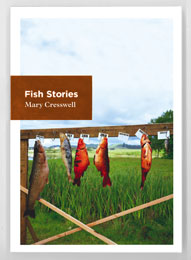 Mary Cresswell is at her imaginative best in this new collection, built from her experiments with the ghazal, a traditional form, which she first met via the work of Agha Shahid Ali and Mimi Khalvati. The poems in Fish Stories are presented as an intellectual challenge to students of the ghazal and glosa forms, encouraging them to develop their own craft. At the same time, Cresswell’s poetry is widely accessible and appealing: using rhyme and varying poetic structures, inspired by a range of topics, but especially by nature and ecology, she combines humour with serious comment to engage and connect with her reader.

Fish Stories has been designed and printed in collaboration with Ilam Press, Ilam School of Fine Arts.

Mary Cresswell came to New Zealand from Los Angeles in 1970. She began writing poetry while winding down a full-time career as a freelance technical editor with a  main interest in New Zealand natural history. Mary is co-author of Millionaire’s Shortbread (Otago University Press, 2003) and the author of two more poetry books, Nearest & Dearest (2009), and Trace Fossils (2011), both published by Steele Roberts.

"Mary Cresswell’s poetry is an adventure playground where experiments in form and ingenious wordplay are part of the game. But this game is serious. Anemometers are whirling; grey-green children are howling on the shoreline. Ignore her at your peril. She’ll make you smile and she’ll make you think."
Janis Freegard, Wellington poet and author of The Glass Rooster

"Natural disaster looms throughout Mary Cresswell’s Fish Stories: avalanche, flood, storm, quake. Sometimes her slant-rhymed poems mimic an environment gone haywire, its patterns fragmenting. The intense formality of this collection, however – populated not only by wild variations on the ghazal but by glosas, syllabics, a cento, and a broken sonnet or two – more often suggest the connective forces still holding the world together, for a while. The waves may 'quarrel up the rocks', as she puts it in ‘Diaspora’, but we birds still ‘stand in rows and lean against each other'."
Lesley Wheeler, Professor of English, Washington and Lee University