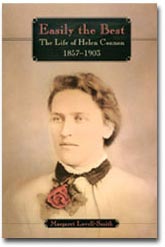 When Helen Connon received her Masters of Arts degree from the University of New Zealand in 1881, she became the first woman in the British Empire to get an honours degree. She later became the second Lady Principal of Christchurch Girl's High School, establishing it firmly as a leading academic secondary school.

Helen Connon's personal life was no less interesting. Her childhood was spent in pioneering gold towns in Victoria and the South Island of New Zealand. When her family settled in Christchurch in 1874, Helen became one of the first women students at Canterbury College, the forerunner of the University of Canterbury. In 1886 she married Professor John Macmillan Brown, the man who had guided her through her university course.

This study of Helen Connon's life sheds new light on her early life, her professional career and her marriage. Above all, it explains how an obscure carpenter's daughter came to be at the cutting edge of educational achievements for women in the nineteenth century.

'This balanced and eminently readable biography is attractively illustrated and well referenced. By giving life to an outstanding but reticent woman, it provides valuable new insights into girls’ education and academic marriage in late Victorian New Zealand.' Dorothy Page, NZ Journal of History

Margaret Lovell-Smith is a Christchurch writer with a special interest in women's history. She has written about Canterbury women for the Dictionary of New Zealand Biography, and edited The Woman Question: writings by the women who won the vote (1992). Her book about the Lovell-Smith family, Plain Living High Thinking (1995), focused on its involvement in the nineteenth-century women's movement in Christchurch. The Enigma of Sister Mary Leo, a biography of the noted Auckland singing teacher, was published by Reed Books in 1998. More recently, Margaret has completed a history for the Hurunui District Council: Hurunui Heritage: the development of a district 1950–2000.