Desert Shorts and other stories 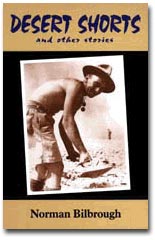 "My mother wore shorts too, but they weren't so long. Her legs looked uncomfortable in the sun, as if they wanted to hide in slacks or stockings. I thought my father and mother were the best looking people in the world. I thought everybody must know this too. But one day I looked at them and was very disappointed. My father had a hectic face; his shorts had gathered a few more immovable stains, and his legs were bad-tempered. And my mother was not pretty at all. I wished she had perky breasts and minced around in high heels. But she had a degree instead."

Thus opens the title story in this collection from one of New Zealand's finest writers, who examines many familiar New Zealand and Australian icons in an ironic, grittily frank manner that will strike a particularly familiar chord with the Baby Boom generation. These finely crafted stories will hark back to what many remember, however mistakenly, as a golden age.

"Bilbrough has as sure a command of the idiom and speech rhythm of his generation as any other writer I know, and vastly superior to most." - Owen Marshall

"Bilbrough has the writers' equivalent of perfect pitch. The tone is spot on, the language fits, there's not a word out of place. In short, it's a damn good read." - Evening Post

"The sharpness and vivid character of each story is positive, as is the descriptive and unabashed language." - Otago Daily Times

"Filled with ironic humour and colloquial descriptives, the characters are people you and I could easily have known... With this calibre of writing and down to earthness, he has captured the essence of New Zealand in the days when people mattered, holidays went on forever and the mobile phone hadn't been invented yet." - Ashburton Guardian

"Bilbrough's well-constructed stories are down to earth, entertaining, understanding of the lives of their characters and not unsympathetic to their disappointments." - Waikato Times

Norman Bilbrough was born in Fielding in 1941. His first collection of short stories, Man With Two Arms, appeared in 1991. This was followed by three books for younger readers, The Birdman Hunts Alone (shortlisted in AIM Senior Fiction Award 1995), The Dump Giants and Dog Breath. His stories for both adults and children have been widely published, broadcast and anthologised and won awards in New Zealand and Australia, including the Joan Faulkner Blake Short Story Competition 1992, the Sunday Star-Times Short Story Competition, and second prize in the Melbourne Age Short Story Competition 1994. In 1999 Norman Bilbrough is Writer in Residence at the University of Canterbury.