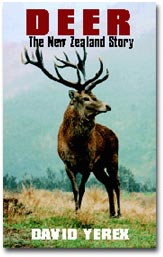 This new book tells the amazing story of red deer in New Zealand since their introduction in the 1850s to provide sport for settlers. At first, some great trophies were taken, but before long deer had so expanded in numbers and range they were eating out the native forests and raiding farmland. This led to their being declared a pest, and to control measures that created a hunting subculture encompassing all levels of society.

There were the deer cullers, employed by the government in a vain attempt at eradication, and from whom arose the legend of the 'Good Keen Man'. There were also private shooters out to score bigger and better trophies or meat for the table, and commercial hunters who found ways to turn pest into profit. Then came the entrepreneurs who opened overseas markets for venison and deer products, shooting and recovering the animals by helicopter or jet-boat from remote and rugged country. Later innovators developed live capture of deer and set the scene for farming them - an enterprise that after 40 years is now conspicuous almost everywhere in the rural landscape.

Today, whether pursued by hunters in the wild or farmed behind fences to earn export dollars, deer remain controversial but are an undeniably significant part of New Zealand's history.

Deer: the New Zealand story provides a detailed, highly readable overview that draws upon a lifetime's experience in the worlds of deer farming and hunting. David Yerex has been specially commissioned by a group of leading figures in the deer industry, who have provided many photographs and much information never previously published. The resulting book will be appreciated by all with an interest in hunting, farming, the environment and their nation's history.