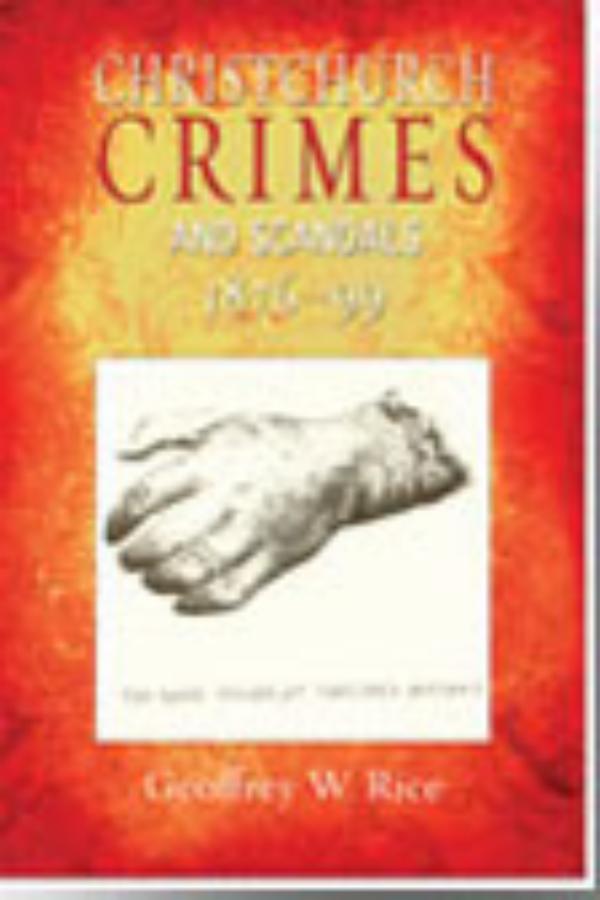 The Boxing Day Riot of 1879 when a parade of Orange Lodge members was attacked by a mob of Irish Catholic navvies swinging axe-handles, a slander case involving one of the city’s richest merchants, the famous Severed Hand Mystery of 1885… Following on from his first volume, Christchurch Crimes 1850–1875: Scandal and Skulduggery in Port and Town, historian Geoffrey Rice presents another fascinating collection of Christchurch crimes and scandals drawn from nineteenth-century newspaper court reports, this time covering the later Victorian period from 1876 to 1899.

We meet some of the city’s most notorious citizens of the period, such as the photographer Eden George, and the preacher-fraudster Arthur Bently Worthington, who caused the one and only reading of the Riot Act in Christchurch. The spectacular bankruptcy of the bishop’s son, Leonard Harper, is explained for the first time, along with the antics of the Brighton tram lady. The Opawa axe murder of 1897 includes a rare photograph of the body.

Magistrates and judges had to deal with a procession of society’s law-breakers passing through their courts, from apologetic drunks and brazen prostitutes, shifty forgers and brutal thugs, rapists and arsonists, bigamists and embezzlers to desperate women charged with infanticide and stony-faced men charged with manslaughter or murder. The defence lawyers were often faced with a difficult task, yet Christchurch in this period had several highly skilled courtroom lawyers who knew how to persuade a jury.
The author’s easy-to-read story-telling style and genuine enthusiasm for and knowledge of his subject bring to life another rich, colourful and intriguing chapter from the city’s past.

Geoffrey W. Rice was formerly Professor of History at the University of Canterbury where his main fields of academic research included eighteenth-century British foreign policy and the social history of medicine in New Zealand. His account of the 1918 influenza pandemic, Black November, was shortlisted in the History section of the 2006 Montana New Zealand Book Awards. He is currently finishing a history of Christchurch’s Victoria Square. His illustrated histories Christchurch Changing, Lyttelton: Port and Town, and All Fall Down: Christchurch’s Lost Chimneys were also published by Canterbury University Press.