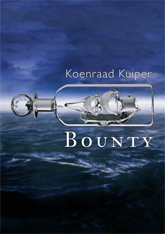 Bounty is a cornucopia and a ship. Ships envelop you and land you in new worlds.

The opening sequence of sonnets pays homage to Frank Hurley, the photographer on Shackleton’s Endurance, which was crushed in the pack-ice in Antarctica in 1915.

The central sequence of the collection recounts the voyage of the Bounty alongside that of the Odyssey, through sonnets addressed to blind fiddler Michael Byrn, who enjoyed ‘allurements of dissipation beyond anything that can be conceived’ in Tahiti, was shipped back in chains to England and court-martialled, was found not guilty, and almost certainly hanged the three of his shipmates who were found guilty.

Koenraad Kuiper arrived from the Netherlands on a converted Liberty ship
in 1951. He is Professor of Linguistics at the University of Canterbury.

His poetry has been published in New Zealand, Canada and the Netherlands. In New Zealand his poems have appeared in Islands, Landfall, Poetry New Zealand, Sport and Takahe.

He has published three previous books of poetry: Signs of Life, Mikrokosmos and Timepieces.