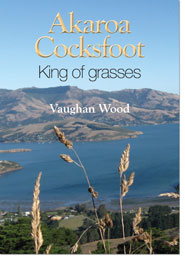 Soon after the introduction of cocksfoot to Banks Peninsula in the mid-19th century, Akaroa cocksfoot grass seed conquered the market – first in New Zealand, then in Australia, and finally in Europe. At the height of the industry, Akaroa cocksfoot was one of the most significant industries in Canterbury, with annual earnings for Banks Peninsula of more than $10 million per annum. It was responsible for the loss of almost all the Peninsula’s unmillable forest. And yet, a generation or two later, the Akaroa cocksfoot seed industry had almost entirely disappeared. More than a century after the industry reached its peak, Vaughan Wood celebrates its remarkable story.

The history of Akaroa cocksfoot is one that embodies many facets of Canterbury life: the farmers and harvesters, the seed merchants, and the engineering and transport firms. It was shaped by the science, politics and world-trade patterns of the time and is thus a story with more than just local interest.

Vaughan Wood is a historical geographer with a longstanding interest in the agricultural history of New Zealand during the 19th and early 20th centuries. He was a contributor to Rural Canterbury: Celebrating its history (Daphne Brasell Associates and Lincoln University Press, 2001), Seeds of Empire (IB Tauris, 2011) and Making a New Land: Environmental histories of New Zealand (Otago University Press, 2013), and has published articles on early soil surveying, agricultural literature, weather records in farm diaries, and the New Zealand Wars. He has worked as a contract historian for the Christchurch City Council and the Waitangi Tribunal.