Talent shortage is one of the biggest issues facing both the digital screen industries and the tech sector and in addition to the competition itself, the Kiwi Game Starter provides game developers the opportunity to gain recognition, industry mentorship and strengthen their skills, supporting them in pursuing a career within the industry.

“I’m proud to see the University of Canterbury continuing to support creativity and innovation in the gaming sector, as this is a key pillar of our larger effort centred on the creation of our Digital Screen Campus and associated efforts on economic growth in these sectors. I wish the very best to everyone that enters the competition and, regardless of who wins, I hope to see many great game ideas produced, expanded upon, and ultimately brought to market.”

Aspiring to become a true anchor institution in the community, aiding in the growth of our local economy, the University is already dedicated to supporting the digital screen industries, from the applied game development and design programmes available through its School of Product Design and the world-leading research centre in virtual reality (VR), augmented reality (AR), applied immersive game design and human robot interaction available through HIT Lab NZ (Human Interface Technology Laboratory). 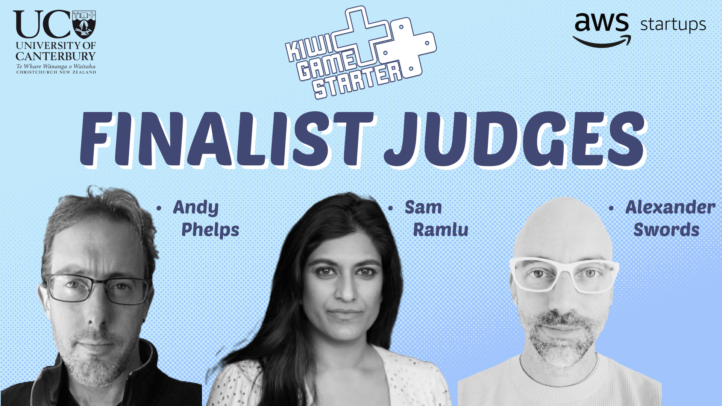 Get to know the experts who make up the 2022 Kiwi Game Starter Competition's final judging panel!

In addition to his research and creative practice, supervision of students and teaching activities, Andy is heavily involved in the University’s Applied Immersive Gaming Initiative (AIGI). The AIGI was established in collaboration with other faculty and staff at UC, HIT Lab NZ and ChristchurchNZ, the city’s promotion and economic development agency.

The AIGI aims to accelerate research and public use of immersive gaming applications, and to build strong connections with the New Zealand games industry.

Outside of his roles at UC, Andy serves as a Professor at American University, Director of the AU Game Centre and President of the Higher Education Video Game Alliance (HEVGA).

Sam is Founder and Managing Director, Method Digital / Mad Carnival Entertainment. An influential thought leader, storyteller, industry champion and creative technology innovator. She has spent over 20 years bringing awe-inspiring stories and experiences to life through digital and emerging technology, one of the most recent including the PAVS 2022 “Slice of Heaven” grand prize nominee “Wanderer” which was the first Playstation VR game created by a New Zealand studio.

Sam is passionate about authenticity, and sees technology as a driver and enabler for creative ideas that create connection with their audience. She also cares deeply about creating pathways for new generations to enter the creative and tech industries*. As well as Wanderer, Sam is co-founder of Method, an award-winning creative tech studio. Earlier this year, Sam launched Mad Carnival, a studio spanning both Auckland and Dunedin offices, making beautiful, fun and wholesome games. The studio’s keystone project is being developed in partnership with a large social media company for its platform, with a scheduled release date in Q3 2022 we eagerly await launch details!

Alexander is a writer, narrative designer and director with over 20 years working with stories, their creators and audiences across a range of mediums. He’s currently working with independent game studios across Australia and Europe, as well as the adaptation of film and literature properties. He’s worked with indies in Berlin, AAA in Sweden and has pitched at E3, Gamescom and GDC.

He is the creator of the Forest Paths Method for Narrative Design. The Method provides plain language development and analysis of story in an approachable and collaborative way, and is being used internationally by developers, researchers and educators in games and screenwriting. Alexander has also used the Method to teach narrative design at NZGDC, GDC, CODE, AFTRS, NIDA and run independent workshops with the support of the Australian Writers Guild, Creative Victoria and the Australian Centre for the Moving Image.

Advising government, arts organisations and educators, he’s an advocate for diverse stories and their writers, understanding the transformational power of story and helping creators explore the narrative potential of any medium.

The three finalists for the NZGDA's Kiwi Game Starter competition were chosen from 21 total entries, and judged based upon overall appeal, originality, aesthetics, production and financial planning, and commercial viability.

The games will be tested by our finalist judges [above] and the winner announced during the New Zealand Game Developer's Conference in August 2022.

Congratulations and best of luck to Out of Sight [Mainframe Games], Undeadly [Irreflex Studios] and Warrior Chef [Rare Parrot Games]!