"I realized the moment I stepped out of the airport that Delhi was going to be unlike any other city I’d spent time in!" Read more about Nic and Evie's experiences at the NZ-India Sustainability Challenge below.

I realised the moment I stepped out of the airport that Delhi was going to be unlike any other city I’d spent time in! My first impressions were of the smoggy, burning smell of the air, closely followed by driving from the airport through hectic traffic – absolutely no rules of staying in your lane over here.

On my first night, my teammates Uday and Shivansh took me out for traditional food and two rounds of desert – it was awesome. Mixed feelings about the chocolate paan – imagine a muesli bar but wrapped in leaves – the taste of the greenery was pretty overpowering :’).

Because my teammates were bang smack in the middle of exams, I spent the rest of my first week by myself. I love the independence that you have when traveling alone – I spent my time exploring as much of the sights and tradition of Delhi as I could. This included the Gurudwara Bangla Sahib (a beautiful Sikh temple – photos attached), the Lotus Temple, India Gate, an ancient observatory, Old Delhi (even more chaotic than New Delhi) and the Red Fort. At the end of the week, all of the NZ students traveled to Delhi, and the next day we tripped to Agra to lay eyes upon the incredible Taj Mahal. It is such an incredible building – it doesn’t even feel real being there.

One of my favourite nights was probably going to Pooja’s (a UC employee who promotes the university to Indian students) house for a home-cooked meal. Her family was so welcoming and it was pretty special to feel at home – while so far away from home! My least favourite part of the trip was, unfortunately, I did get sick (they say you haven’t truly been to India unless you get Delhi Belly right!) and spending a whole day in bed is the last thing you want to do when you’ve only got a short time in another country. However, thankfully I got better before the final presentation!

Despite all the amazing sights I have seen, the best part about this experience has been getting to meet so many passionate people, working on projects that are truly improving the quality of people’s lives over here in India. No matter which team wins in the final of the NZ-India Sustainability Challenge, I think everyone will be proud of the work they have contributed to, and we’ll be able to part ways with new friends, new connections and a widened perspective of the world we live in. 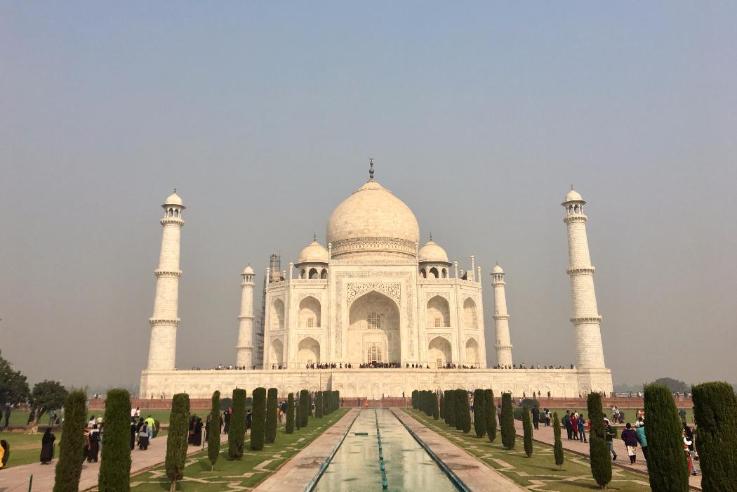 Where else, but in India, could you: talk to mothers in a local vaccination center, hang out of a moving bus, get a shout-out from a Bollywood star on Instagram, see a Wonder of the World, nearly get lost doing washing, and give a winning presentation; all in 13 days (and still have time for a birthday celebration).

Lying an hour north of Mangalore on the South-West coast of India, Manipal University hosted me for the first week of the trip. With the student town vibe of Dunedin and the climate of Bali, the place felt designed for me. Being based out of the huge “Innovation Centre” on campus allowed a glimpse into some awesome projects going on. One particularly cool project saw students developing a new way of producing solar panels in a way that makes them suitable for use in slums – providing a cheap and permanent power source!

The NZ-India Sustainability Challenge asks teams to come up with ways of making India a more sustainable place to live. Each of the six final teams from the regional rounds got a Kiwi student to help them out in preparation for the final presentation. VaxiBead, the project I am fortunate enough to have worked with, looks to improve vaccination record keeping in India. Despite a government-funded vaccine schedule, there are 9.6 million unvaccinated children (under 5 years old) in India – more than twice the total population of New Zealand! VaxiBead tackles this by replacing the notorious mountains of paperwork with a digital system, and some ingenious other components, to raise vaccination engagement across the country.

Work on VaxiBead had been ongoing for around 8 months when I arrived in India. This meant that preparation for the finale was mostly focused on gathering promo material and additional feedback from stakeholders. This meant that we spent most of our time out in the field - at health centers, slums, and an orphanage. Night-times were spent building the slides and putting together a short video. We finalised our presentation only a few hours before we were on stage, with just enough time for a quick backstage rehearsal. Despite plenty of public speaking experience, this was unlike anything I had done before. The ballroom was astonishingly beautiful, with some very notable attendees, and the whole experience was almost larger than life. Despite tough competition, we were fortunate enough to take out first place – with the prize being an all expenses paid trip for my Indian teammates to visit New Zealand!

I was fortunate enough to work with the most amazing team. Saisri and Dhruv are both students at Manipal University who started this project with guidance from Dr. Arun Shanbhag – a Harvard professor for 34 years! Between working on the project, Dhruv and Saisri took me to the local beach, to “Barbeque Nation” for my birthday (which included having cake thrown in my face), for meals at local student restaurants, and introduced me to their friends. I even stayed over at one of their friend’s flats as we had missed our hall of residence’s curfew. I’d struggle to find better people to have sitting by my bed as I dealt with a rough case of food poisoning!

We spent the second week in New Delhi, where we met up with the other New Zealand students and their teams. This included a trip to the Taj Mahal, a couple of nights out in Delhi, and more preparation for the presentation. I was invited to stay a night at Dhruv’s family home on the outskirts of the city. Meeting and living with an Indian family, and eating home cooking was one of the best cultural experiences of the trip – nothing beats Grandma’s cooking! Along with Evie, I also visited Pooja’s house (our UC contact in Delhi), for a meal with her family too!

Culturally this has been an experience like no other. Being thrown into the deep end, away from any other Kiwi’s, forced me into total immersion - it was awesome. It turns out that Indian students are as political as we are, and seeing the world through a different “cultural lens” allowed me to challenge my own views in a new way. Even the presentation offered plenty of new experiences. Indian judges definitely don’t hold back in comments, and presenting to such an esteemed audience might have had me a little nervous.

I am so grateful to have had the opportunity to work alongside so many inspirational people. It may be a cliché, but this trip was definitely life-changing. Not only seeing, but experiencing and getting involved in such a different culture has given me a whole new perspective on the world. Learning about all of the other team’s projects has me so excited for the future, that winning the competition is only a bonus. Having been given permission to implement VaxiBead in the Udupi District (pop ~1.1m), there are big things to come for the project. I am endlessly thankful to UCE and Education NZ for giving me this opportunity, and I can’t wait to show Dhruv, Saisri, and Arun around when they come to New Zealand in March!