In just 54 hours teams were formed, ideas were generated and pitches perfected. In some cases, apps even created! 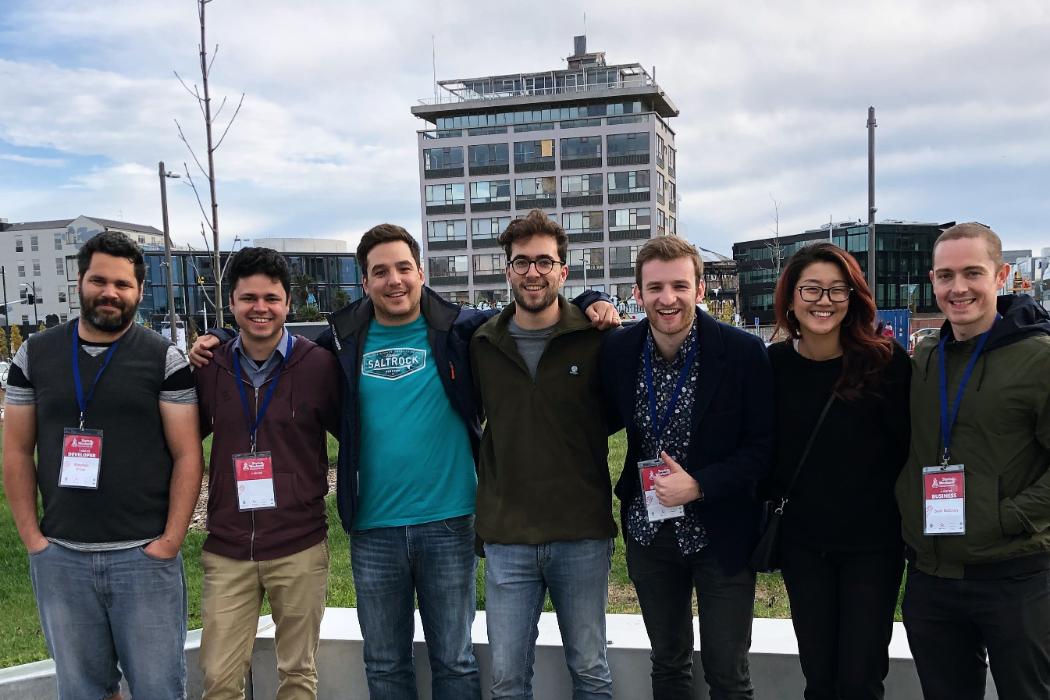 Kade Larsen, (MEM), also joined and worked with a team who developed ShareMyRide, a carpooling app. They worked hard together and came out at the end of the weekend with a developed, profitable business model and final user interface design for a phone application.

Friday night saw the formation of teams and idea generation and refinement over beers, pizza and networking. Jacob described GreenHouse as ‘a pretty social space’.

Students had the choice of either pitching an idea in one minute or making up a team with somebody that had pitched, ‘I chose to join a team and by the end of the first night we had refined our idea so much, we came out with something having no link to what we started with’, explained Jacob.

The next day teams started out with relevant market validation by creating surveys and going out and physically asking potential customers and users questions about their idea. For Jacob’s team, there were two parts, they had to find out if businesses would adopt their idea and if users would actually use their app.

Kade’s team also did a lot of market validation, ‘After open conversations about traffic and getting around in Christchurch, most people agreed this was a key problem, parking being one of the main issues’, he said.

‘I was heavily involved with developing the business model with my MEM knowledge. I was able to figure out a way to make it profitable but still competitive. We managed to get it as cheap as being on the bus and free travel for the driver. Passengers would travel between 30-40 cents/km, costing only about $3 - $4 to travel from Sumner to the city’, said Kade.

Throughout the weekend, teams had mentors and designers available to help them and every few hours a pitch practice with ‘consistent feedback to keep you on track’, explained Jacob.

On Sunday afternoon seven teams competed at the finale held at Vodafone Xone. The winning teams were:

‘Find The Gap, the winning team showed real determination after their original market of medical professionals didn’t respond to their concept well. They pivoted to providing the service to hair and beauty professionals’ said Geoff Brash, facilitator of Startup Weekend Christchurch.

Kade explained the value of the weekend, working in a team of 6 with new skill sets describing how he had never met or worked with software developers before.

‘It was like magic to me seeing them develop a user interface from a black screen and white code’, he said.

Another one of the biggest learnings over the weekend for Kade was team dynamics. In a team of 6, they had to come up with an agreed direction, without ‘sitting on clashing ideas for too long’. Over the weekend they developed strong relationships which they will be able to take into the future.

Other students that got tickets from UCE to Startup Weekend Christchurch were Max Xu, Julia Harrison, Md Emrul Ashan Mehedi and Hamidreza Parvaresh.

Startup Weekend is designed to inspire people to be more entrepreneurial and is a great way to understand if you like the risk and uncertainty of being a part of a startup. In just 54 hours, students experience the highs, lows, fun and pressure that make up life in a startup; meeting mentors, investors, co-founders and sponsors along the journey. There are over 400 Startup Weekends every year, all around the world.

Jacob would recommend Startup Weekend for ‘anyone who has an idea, no matter how big or small and a desire to act upon it’.

If you want to hone your skills or boost your CV, keep an eye out for UCE’s upcoming 48-Hour Challenges by following us on social media (Facebook, Instagram, LinkedIn and Twitter) and subscribing to our emails here.