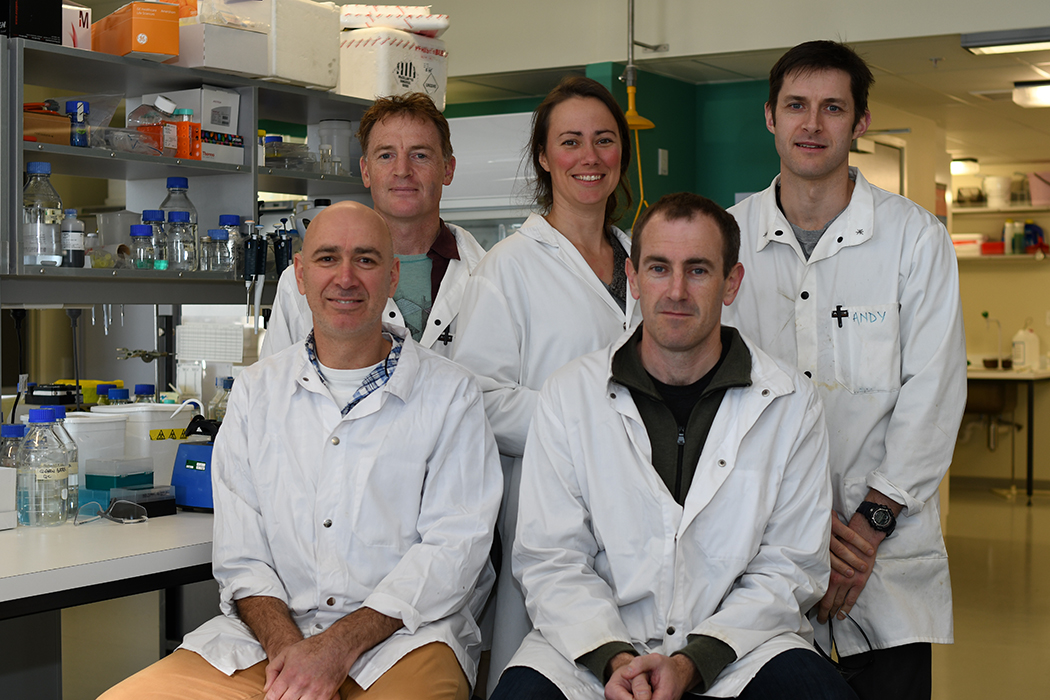 Andrew works at the interface of chemistry and biochemistry, earning his BSc (Honours) and PhD in Chemistry at the University of Canterbury focusing on synthetic organic chemistry. During a postdoctoral fellowship, he explored enzymes involved in amino acid biosynthetic pathways and glycoprotein modification, before returning to synthetic chemistry at Industrial Research Limited (now the Ferrier Research Institute). Here his research led to the synthesis of complex pharmaceutical agents for domestic and international clients that have advanced into clinical trials and international patents. Andrew established the Callaghan Innovation Protein Science and Engineering team in 2012, linking the diverse capabilities of the multidisciplinary team. Andrew’s strengths are his knowledge of chemistry, biochemistry, and the commercialisation of biotechnology.

Craig is a molecular biologist with knowledge and experience working with bacterial, plant and mammalian recombinant expression systems. He received BSc and MSc degrees in cellular and molecular biology from the University of Auckland, and a PhD from King’s College London. As a research fellow at St George’s University of London, Craig has been involved in fundamental research into the design, expression and immunology of novel antibody-based vaccines for treatment of infectious diseases. Craig has interests in engineering and expression of antibodies and novel antibody formats, and his work using plants as a biotechnology platform for recombinant protein expression has led him into the field of synthetic biology. In his current position in the Protein Science and Engineering team at Callaghan Innovation, he has developed an innovative modular DNA assembly platform for synthetic biology, which is being exploited for metabolic pathway engineering for production of high value secondary metabolites and commodity chemicals.

Campbell completed a BSc (Honours) in Biochemistry and a PhD in Pathology at the University of Otago, where he studied the molecular pathology of coagulation disorders. He then spent time as a postdoctoral researcher in the USA, at The Scripps Research Institute and Sanford Burnham Medical Research Institute in San Diego, California. His work there involved developing, characterising and treating tissue and animal models of calcification disorders, in addition to protein expression and analysis. He is currently working on expanding the range of recombinant protein expression platforms offered by the group.

Barbara completed her Msc in Molecular Microbiology at the Karl-Franzens University in Graz, Austria and received her PhD in Cell biology and Biochemistry from the Graz University of Technology (Austria) by investigating non-polar lipid metabolism and the topology of yeast lipases in yeasts. Before joining Callaghan Innovation in 2018, Barbara spent 4 years as a postdoctoral research fellow at Monash University in Melbourne where she studied key virulence factors of the human fungal pathogen Candida albicans.

Daniela completed her PhD in Molecular Microbiology at the University of Wageningen, The Netherlands studying the interaction between probiotic bacteria and the human intestine. During a postdoctoral fellowship in Basel, Switzerland she focussed on Salmonella pathogenesis. In 2016 she moved to New Zealand and took up a position as a Research Associate at the University of Canterbury before she joined the Protein Science and Engineering team at Callaghan in 2018.

Dion is the team’s assay development expert, delivering enzymatic and pharmaceutical research outcomes for both external academics and commercial companies operating in the biotechnology and nutraceutical spaces. Dion joined the Protein Science and Engineering Team from Southern Cross University in Australia, following stints at the University of Exeter and Rothamstead Research in the UK, and at AgResearch in New Zealand. Dion earned his Masters of Science in Biochemistry from Lincoln University before studying the denaturation and degradation of thermostable enzymes at the University of Waikato. Dion’s interests are in establishing enzymatic and cell-based assay systems, and advancing his lifelong passion for mathematics.