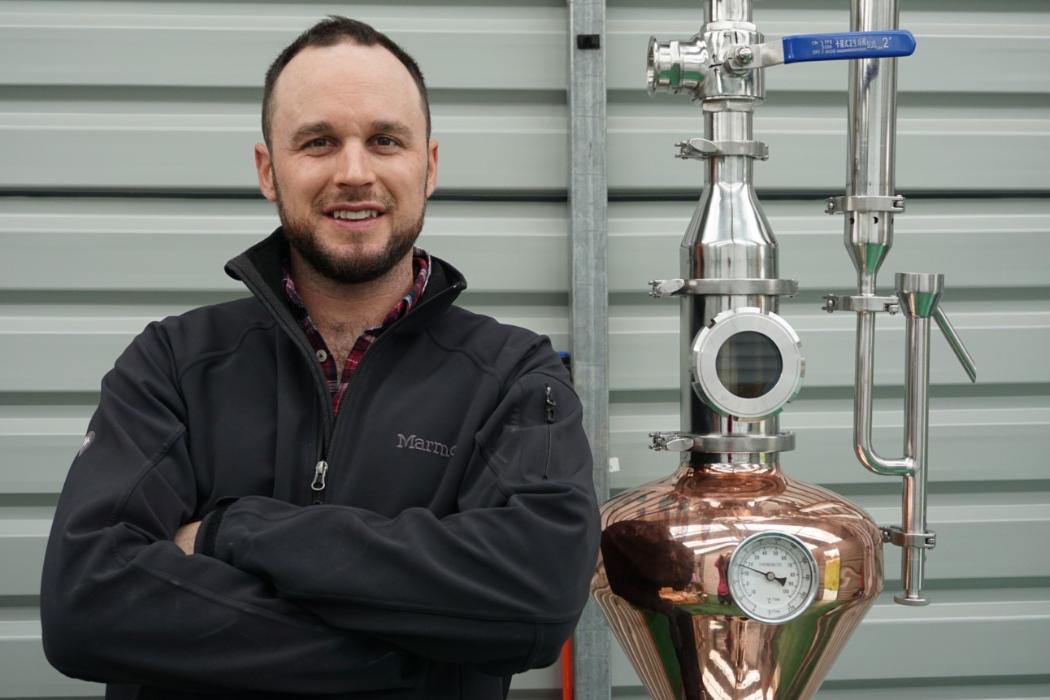 From Political Science to CEO of a Distilling Company, can you share a bit about your journey since graduation?

I graduated UC at the end of 2012 and left for China the following January. Initially it was supposed to be a ‘quick year abroad’ before returning to Christchurch, yet somehow, here I am nearly 8 years later. I’ve always had a passion for brewing & distilling, something I was heavily involved in during my time at UC as president of the Brewing Club. Not long after arriving in China I landed a gig brewing at a small brewpub in Shanghai, a role which quickly expanded as the business grew.

In 2015 I moved on to the big boys, AB-InBev, working for their recently created Disruptive Growth Division. This was a major step up, I was 25 and working for a global brewing company. There were a few moments of imposter syndrome, but once I got stuck into the work it quickly became the new normal. They sent me to Chicago for training with the team at Goose Island (one of the first craft brands acquired by ABI back in 2011), and on my return to China I was tasked to setup and open a Goose Island brewpub in downtown Shanghai…no mean feat! Working with ABI put me through my paces, learning how to effectively communicate within such a large organization and manage both down and up! The technical skills and experience gained working at the top of my field for nearly four years set me in great stead for my eventual transition to my current role.

Mid 2019, newly married, my wife and I packed up life in the big city and moved 2000km away to a remote southern corner of China. We chose Shangri-La city, Yunnan province to be the base of operations for our dream business - setting up a craft distillery. Shangri-La is located in the northern corner of Yunnan near the Tibetan border, in the foothills of the Tibetan Alps. Probably about as far flung from the hustle and bustle of the big smoke as one could be! The purity, peacefulness and refreshing solitude of the place attracted us for many reasons. I’ve never seen a trace of air pollution here, the rivers run clear and people are genuinely happy. We set about to capture this zeitgeist as we distill that into our products, to give all our friends still stuck back in the city a little taste of the wild.

Things are just getting started for us here, as I write we are preparing for the launch of our first offering, our gin brand ‘The Rambler’, and I reckon there will be plenty more stories to come!

Life in Shangri-La is vastly different than Shanghai (or any big city for that matter). The population here is roughly 90% ethnically Tibetan, and it is still considered a very rural area, somewhat in poverty on a GDP basis compared to the rest of the country, you wouldn’t know it for looking though! The riches of the people here aren’t measured in Yuan, but in life quality, access to nature and abundance of fresh air and freedom.

My experiences in China seem to be getting more and more diverse these days, but a few takeaways: China moves fast! Faster than us chilled Kiwis could imagine. China is diverse! Look at a map of China, Shanghai is a tiny dot, Han people (the largest ethnic group) are just the beginning. My 6 years of Mandarin study in Shanghai aren’t worth much up here where there’s at least 10 languages spoken daily around me. I love exploring and learning more, and as I do I seem to find out more and more about myself too.


What does a typical day at work look like for you?

Typical day? Haha, I can’t remember that last time I had one of those! Try starting a business as a foreigner, in a developing area in rural China! The first day I went to into apply for my business license they thought I was lost. These days were getting ready to launch, so there’s a huge mixture of operations work, strategy and planning as well as marketing and branding work to be done. It’s an incredibly diverse role, but I love the challenges. Of course there’s been a few flat days along the way so far, but I’m often reminded of Kipling - meeting with triumph and disaster just the same - keeps me on the steady. Post launch there’s still going to be a lot of R&D work to do as we add new SKUs to the lineup and work to reach further afield within the markets here and abroad.

How are you using the skills you learned at UC in your current role?

My time at UC was amazing in terms of the knowledge I gained, adding practical experience to that has been absolutely fulfilling. I studied Political Science, choosing to enter the College of Arts as I felt it would give me knowledge I could use at a personal level, not just the academic. I still approach situations of conflict, negotiation and celebration with skills learned during my time in the lectures of the greats like Jim Ockey, Therese Arseneau and Anne Marie Brady. Never question if what you study, whatever it is, will be useful to you one day - it most certainly will be.

As a student, did you ever think you would be where you are now?

Not at all! I always knew I would like to run my own operation one day, but didn’t expect it to be here, it’s an awesome treat to see how life turns out. I’ve always had a deep intention, and I believe that is what lead me to where I am today. Combine hard work, some great mentors and managers along the way, the support of friends and family, and never giving up on that dream - I reckon you can just about do anything you want to.