The Rt Hon Sir John Key graduated from the University of Canterbury in 1983 with a Bachelor of Commerce degree majoring in Accountancy, was the Prime Minister of New Zealand for eight years and Leader of the National Party for 10 years, before announcing his retirement from the leadership role in December 2016. 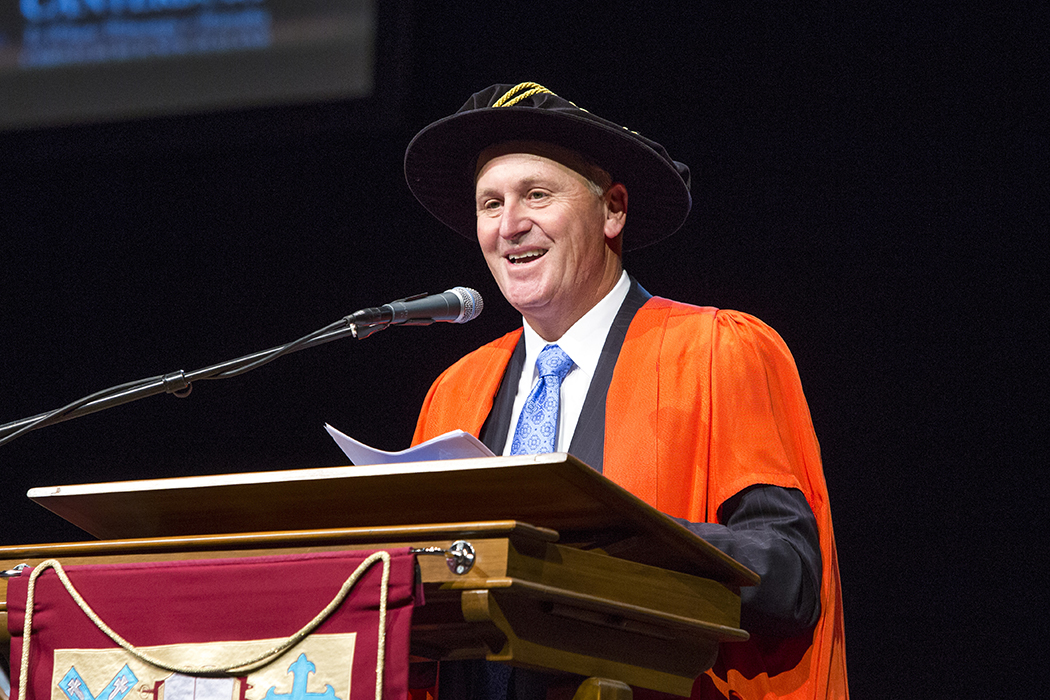 Sir John was brought up in Canterbury in straitened circumstances in a state house by his mother who migrated to New Zealand after the Second World War. His own abilities, and the training and intellectual development he acquired on becoming a student of this University, altered his life and laid the foundation for an outstanding career in his chosen field of international finance and through subsequent management studies courses at Harvard University.

In mid-career John Key chose to forgo the very real prospect of heading one of the great financial institutions of our time to return to the country in which he had been born, brought up and educated, to enter public service and a career in politics. He was first elected as an MP for Helensville in 2002 and became leader of the National Party in 2006. He became Prime Minister and led his party in government for three successive terms of office.

His achievements include leading the government’s response to the Canterbury earthquakes and the Global Financial Crisis, as well as a range of economic, social and environmental reforms. He also championed the national cycleway, a number of treaty settlements were made during his three terms in office, and he played a role in initiatives focused on enhancing New Zealand's sense of nationhood. The highest profile of those was his campaign to change the New Zealand flag.

Sir John was instrumental in reinstating the titles of knights and dames in New Zealand, and received one of the top honours in this year’s Queen’s Birthday list, when he was made a Knight Grand Companion of the New Zealand Order of Merit.

In life after politics, he has embarked on new careers on the speaking circuit and in the corporate and charity sectors. Sir John has been appointed to the Air New Zealand board, among other directorships. He has also taken a role advising a $200 billion United States corporation on its investments in China, as well as an advisory role with a New York fund manager, and as a representative of Japanese billionaire Dr Haruhisa Handa. He has been appointed an Honorary Companion of the Order of Australia and more recently was appointed to the New Zealand board of ANZ, and in January will become chair of that board.

He is a valued alumnus of this University.

Sir John has provided strong support to the University of Canterbury, especially in the years since the 2010/2011 earthquakes. His leadership has been critical to the rebuild, not just on campus but in the region in general, and the University will be eternally grateful to him for that.

He has also been a supporter of the University in a personal capacity and we sincerely hope that his connection with this institution will continue, and strengthen in time to come.

Citation authorised as true and correct at December 2017.