Ms Elisabeth Calder (Liz) is an English editor and publisher who, during her distinguished career, has discovered some of the greatest writers of our times, including, to name a few, Salman Rushdie, Julian Barnes and Anita Brookner. 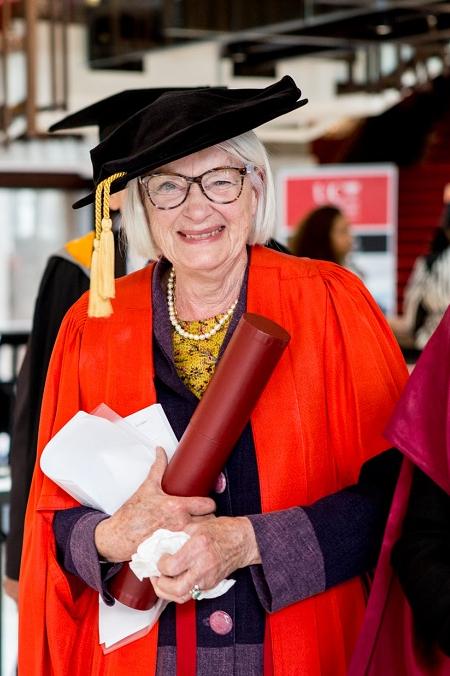 Liz emigrated with her family from England to New Zealand in 1949 and returned to England after graduating with a Bachelor of Arts in English literature from UC in 1958.

Her gift for identifying outstanding writers saw her rise through the publishing world, to become a founding director of literary giant Bloomsbury Publishing.

Liz began her publishing career quite auspiciously in 1971 at Victor Gollancz, by publishing Salman Rushdie's first novel Grimus, John Irving's The World According to Garp and Angela Carter's The Passion of New Eve.

Accolades have flowed: Liz was named Editor of the Year at the British Book Awards in 1997, received an Order of Merit for Services to culture in Brazil in 2004, was awarded an Honorary Doctorate by University Campus Suffolk in 2012 and was named a Commander of the Order of the British Empire (CBE) in 2018.

Despite her busy career, she also co-founded Women in Publishing (1979) and served as Chair of the Royal Court Theatre in London. Liz was a founder of the Groucho Club and the Orange Prize for Fiction and in 2010 was a judge on the Orange Prize. This year she is a judge for the 2019 Man Booker Prize for fiction.

Liz's love of Brazil bloomed in the 1960s and has never abated, finding expression in 2003 in the Paraty International Literary Festival (Festa Literária Internacional de Paraty or ‘FLIP’) in Brazil, of which she is still President.

The University of Canterbury | Te Whare Wānanga o Waitaha is very proud to be associated with Liz Calder, whose work has left an indelible mark on the publishing world. Her legacy will continue well into the future and she richly deserves receiving the award of Doctor of Letters (honoris causa).

Citation authorised as true and correct, May 2019.