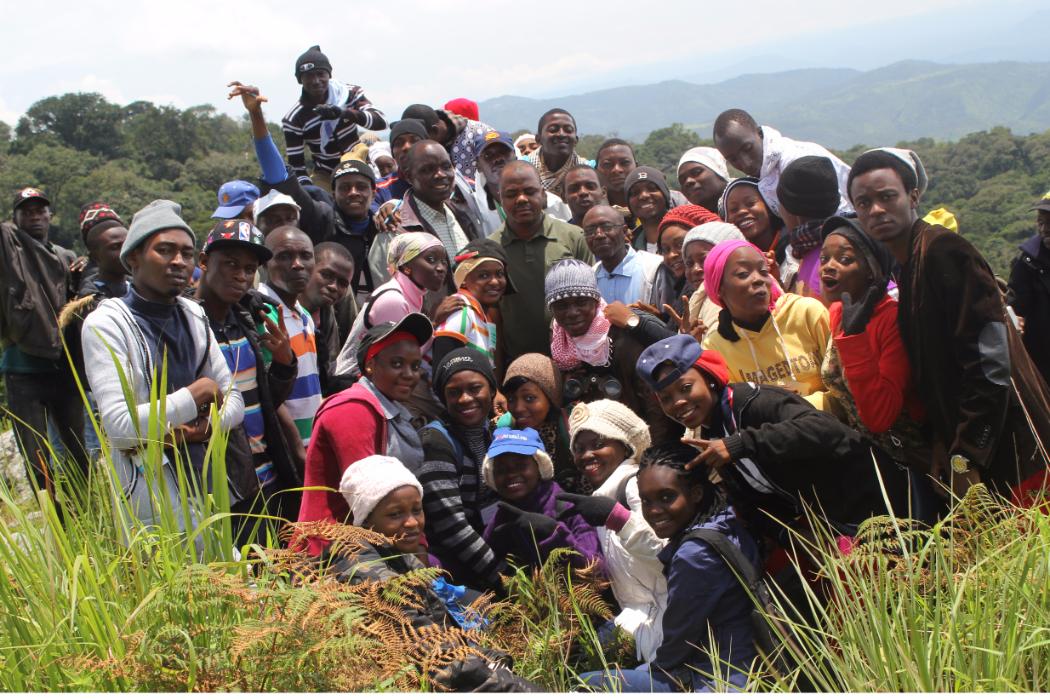 Both the herbarium and the virtual herbarium are continuing to grow. Matt Walters has added over 270 species to the plant checklist now called ‘An illustrated checklist of the flora of Ngel Nyaki Forest Reserve’. Around 1000 images from Ngel Nyaki have been added to Phytoimages and a similar number to the West African Plants - A Photo Guide. This is an interactive online plant identification guide.

We have a series of transects totalling 14 km in length and 4 m wide, along which we have labelled all trees >10 cm DBH. These trees, almost 2000, are scored on a monthly basis for phenology (fruiting, flowering and leaf flush). From these data, we are gaining an accurate picture of fruit availability in the forest for every month of the year and how this varies from year to year. Along with other data this underpins many research programmes. Half of our phenology data is collected in the same was as the Gashaka Gumti Primatorlgy Project (GGPP) phenology data and this may provide a good opportunity for collaboration. Here estimates of fruit abundance are made.

There are 16 permanent photo points on the edge of Ngel Nyaki Forest Reserve, including Kurmin Danko. The aim of the photo points is to detect changes in forest cover associated with our restoration efforts and as well as measuring the effects of cattle grazing and fire. Annual or biannual photos have been taken since 2006.

In late 2013 we established 13 permanent vegetation plots in fenced off grassland. Each plot is 5 x 5 metres square and the 12 plots include a range of grassland types. Within each plot we record all species present and percentage cover. The idea is to repeat the sampling biannually so that we begin to understand how grassland responds to protection from grazing and fire. We are collecting our data in the same format as RECCE plots, an internationally accepted technique for inventory and monitoring in a wide range of environments – the RECCE plot is based on the European Relevé method of vegetation sampling.

Our species conservation work involves habitat conservation as well as understanding particular species ecology and species interactions. We have a research program investigating the ecology of the Nigerian /Cameroon chimpanzee and so far have determined population size (Beck and Chapman 2006), basic ecology (Dutton 2013), diet (Dutton and Chapman 2014); tool use, nesting ecology, seed dispersal (Dutton et al 2014) and population genetics (Knight 2014). The population genetics work is summarized in two papers which are under review in PLOS ONE and Oryx. Key findings from these research projects are that the Ngel Nyaki population of chimps while small (approximately 18 individuals), it harbours genetic diversity not found elsewhere. Now that the population is isolated from nearby populations there is good reason to develop forest corridors to link this population with the Gashaka population to the northeast and those of Akwaizanter to the south-west. In addition, the movement of a Gashaka chimp into Ngel Nyaki to promote out-crossing is a potential management tool.

We have discovered ‘new’ chimp tools at Ngel Nyaki, which make it an interesting population, valuable in the investigation of ecology vs culture in terms of tool use.

We are exploring network properties of a sunbird- tree pollination network in order to predict which species are most vulnerable to extinction. A summary of this work is presented below in the format of the thesis layout, as it is an ongoing project. Ngel Nyaki is rich in sunbird species (14) and they vary greatly in terms of local abundance. This research has resulted in additions to the Ngel Nyaki bird checklist, range extensions and an advance in theoretical research into plant-animal network properties.

The putty-nose monkey, Cercopithecus nictitans martini is possibly a rare subspecies at Ngel Nyaki (Oates pers. com). We are investigating its feeding ecology and ranging behaviour. We also intend to take this farther and look at the effect of the putty-nose on forest restoration.

We have a programme (in collaboration with David Blackburn of the Californian Academy of Sciences) into amphibian conservation. From this we have identified several new species of frog and Denise Ayorro has worked on the population genetics of two key species, in particular looking at gene flow among forest populations.

A new initiative involves the population genetics of rare tree species, building on Josh Thia’s MSc research (which was supported by a Chester Zoo student grant). A key finding is the very low level of genetic variation found in the species he looked at. A major conclusion from this work is that perhaps many of the montane tree species in Nigeria have gone through a bottleneck during the Pleistocene ice age which may explain the extremely low diversity. We now have two new PhD students starting to investigate details of specific Red Data Listed species, including ecology to identify any negative effects of inbreeding.

We have a major forest restoration initiative which involves simply fencing off areas of grassland adjacent to the forest, keeping cattle out and preventing fire. Additionally, in some areas we have been actively planting tree seedlings grown in the nursery. Over 2000 tree seedlings have been planted to date and we have records of which have survived, which are the most useful species to plant into grassland, and how best to treat the seed to ensure rapid germination.

We have a research initiative into how to accelerate and improve restoration. An ongoing research-assistant maintained project involves an experiment with four different management treatments of the grassland; perches, burning, grubbing and seeding. These treatments are applied on an annual basis and the grassland is thereafter surveyed for seedlings.

One hundred and fifty seed traps are inspected every week. All seeds are identified to determine seed rain into fenced off areas (Barnes and Chapman 2014).

Babale Alyu and coworkers have investigated the role of scatter hoarding rodents in the dispersal of forest tree seeds and the role of these secondary dispersers in forest regeneration. We are particularly interested in large-seeded species which have likely lost their frugiferous, primary dispersers. Results clearly show the African pouched rats are the most important rodents in this role. This work is being taken farther by Biplang Yadock who is including work into the ecology of the pouched rat.

Our automated weather station is now being maintained by engineers from the Nigerian Meteorological Institute (NIMET). This successful collaboration began with a visit by engineer Olatokunbo Okulaja and meteorologist Philip Saleh to Ngel Nyaki.

Olatokunbo Okulaja will ensure the data are successfully analysed and following this they will be used in Nigerian TV weather forecasts. Of course the data will also be freely available to NMFP researchers, farmers and anyone else who requests them. In order to ensure that this is as useful an initiative as possible, we are looking into buying additional soil temperature probes and upgrading the software to be more user-friendly.